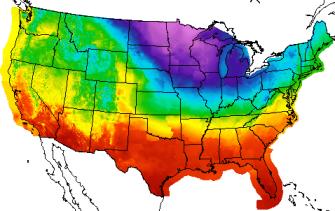 So far February has been off to a rousingly warm start. The average temperature has been 10.64 degrees Fahrenheit above normal, including a record-setting, nay record-blasting, high of 68 degrees on Wednesday. The recent warm stretch, today is the 13th straight warmer-than-normal day, will continue only through tomorrow. Today will be sort of cloudy, sort of sunny with a high around 45. We may see a litttle snow early tomorrow and a little rain later in the day. The high tomorrow may sneak up to the upper 40s.

Without any sunlight the cold air piles up in the Arctic during the winter. Every few weeks that cold air breaks loose and drains southward. That's what's happening this weekend. Weekend high temperatures in Yellowknife will be around 40 below, by midweek that will "warm" to only 5-10 below zero Fahrenheit. That cold air doesn't dissappear, but moves southward and there is nothing to stop that journey until it hits the Gulf of Mexico. Cold air masses like this are typically very shallow, so the Appalachians to our west act as a dam, keeping the East Coast from the brunt of the cold.

While we may not get as cold as Chicago, Sunday isn't going to be a day for picnicking either. Expect a morning high in the mid-30s before the cold air arrives. The cold air will arrive in a huff. The temperature should drop steadily during the day and it is going to be windy. Winds of 20-30 miles an hour are going to make it feel miserable. It is yet unclear whether the cold air will last just a couple of days or stick around for a while.