If you took the L train in or out of Bedford Avenue (New York City's Most Relevant Subway Station) today, you may have noticed a man covered head to toe in shiny green wrapping paper just sitting there on the bench. Whatever! You may have opted NOT TO ENGAGE the Pulp Fiction-esque Gimp Man, which is our modus operandi when encountering such characters on or off the subway. But if the sight left you mildly curious, here's an explainer. 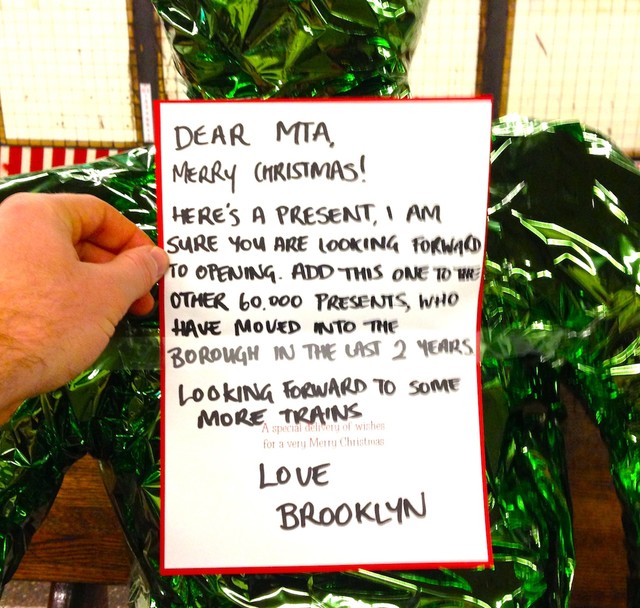 Area man Julian Cole, whose last subway project, L Degrees, predicted the temperature at every station on the L line, tells us that the man inside the wrapping paper is not in fact a man at all, but rather a life-size mold Cole made of his own body, then covered in festive paper. It's important to stay busy. 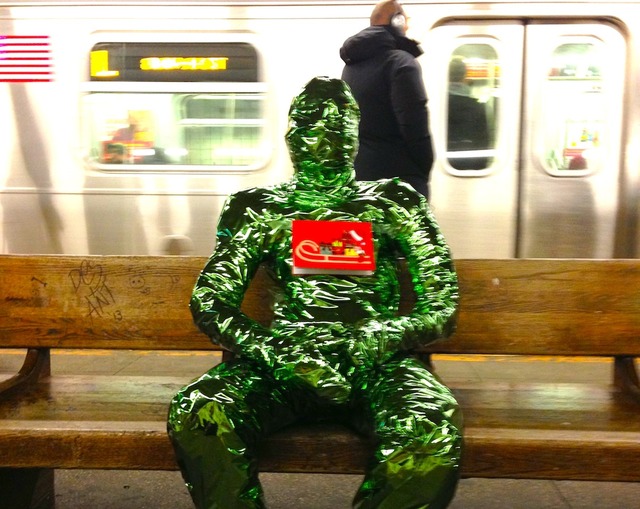 Cole's installation, in one of the more crowded subway stations in the system, is intended as a "friendly reminder" to the MTA about "the 2.4% population growth rate that is happening in Brooklyn at the moment." A Holiday card attached to the mold reads, "Dear MTA, Merry Christmas! Here's a present I am sure you are looking forward to opening. Add this one to the other 60,000 presents who have moved into the borough in the last 2 years! Best of luck with those extra trains services. Love, Brooklyn."

Last month, the MTA confirmed that it would add more trains along the L line during peak travel times, so there's plenty of room for gimps of all shapes and sizes.

#brooklyn
#hipsters
#l train
#MTA
#williamsburg
#original
Do you know the scoop? Comment below or Send us a Tip