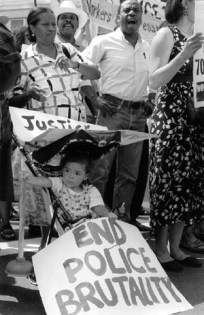 The Post visited with Abner Louima, one of the city's most famous symbols of police brutality, ten years after the infamous incident at Brooklyn 70th Precinct. Louima had been arrested on August 9, 1997, after a scuffle outside a Brooklyn club. He claimed he was beaten by police officers on the way to the precinct, and later at the precinct, he was further beaten and sodomized with a toilet plunger while handcuffed. Louima had a perforated colon and damaged bladder, and the plunger was also shoved into his mouth, damaging his teeth.

The police officers involved were tried and convicted. Three officers had their convictions overturned, but one, Charles Schwarz, eventually served 5 years for lying about his role. And Justin Volpe was sentenced to 30 years in jail. Louima had initially claimed the cops yelled, "It's Giuliani Time," during the attack, but then later retracted the statement. Critics of then Mayor Giuliani had seized on the phrase, only for Giuliani to ask for an apology when Louima recanted.

Louima, a Haitian immigrant who had worked as a security guard before the incident, received an $8.75 million settlement, $5.8 million of which was left after legal fees. The Post notes that he lives with his family in Florida (he has a four-bedroom home and quite a few luxury cars) and has created a nonprofit to build hospitals and educate children in Haiti.

Volpe's lawyer, Marvyn Kornberg, tells the Post the city "absolutely" overpaid, "Louima's now basking in all of these riches, and Volpe's doing 30 years on what I consider to be an excessive sentence." But the Reverend Al Sharpton said, "If you ask him if he'd rather have the millions or the dignity, I'm sure he'd rather not have had the broomstick shoved in his rectum."

The Smoking Gun has documents about the case. And the federal prosecutor who gave the opening statement, Kenneth Thompson, told the Post, "When Louima was dragged into that stall, I felt like all of us were dragged in there with them."