A Visit to the East 180th Street Maintenance Facility 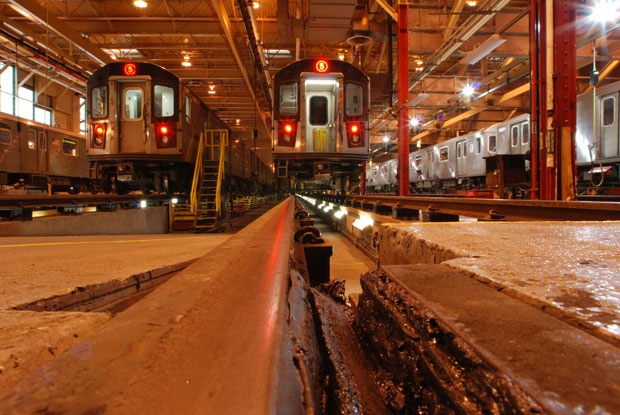 Sunday, we took a Transit Museum tour of the East 180th Street Maintenance Facility led by Joseph Tassiello, the Superintendent of the facility. He explained the role of the shops and how the modern Bombardier R142 subway car has made his job easier in getting the thirty-three 10-car-trains in service on the 5 train every day.

In the days of the Redbirds, fixing something simple like a damaged floor involved taking the train out of service, stripping out all the seats and poles to replace the floor. Today with the R142, the floor is in modular sections, so the damaged portion can be replaced quickly and easily with just the damaged section of floor having to be removed.

When things like the HVAC (heating ventilation and air conditioning) unit had to be repaired, specialist employees need to be used on the old cars. Now, regular employees can just disconnect the modular HVAC unit, remove and replace it, connect the new one then send the bad one off for service – all in about an hour.

One of the other tasks of the shop is to inspect the 385 car R142 fleet that runs on the 5 train on 66 day average cycle. Again, this takes less time, effort and inspectors than with the Redbirds thanks to the design of the cars and the ability to download data about the health of the car from its black box onto laptops. However, the Transit Authority hasn’t gone all computerized, since paper records are also needed for not just the cars, but for the employees too. We wonder how much money the MTA could save by going paperless.

The tour was quite informative, as we learned: The door thresholds on subway cars were heated; the red stripes on the R142s isn’t a decorative element, but are on either side of doors that have the wheel chair spot next to it; and the newest subway equipment uses composite brakes, which reduces the amount of steel dust in the system.

Tassiello gave an excellent tour which satisfied the subway enthusiasts as well as those merely curious to take a behind the scenes peek on how the subway works.

#east180thstreetmaintenancefacility
#irt
#MTA
#museum
#subway
#train
#transit
#transit museum
#transitmuseum
Do you know the scoop? Comment below or Send us a Tip