For subway riders with accessibility needs, there’s nothing more daunting than a flight of stairs in a station—with no elevator in sight.

The issue of accessibility in New York’s subway system has been an ongoing struggle for disability rights advocates, who filed a lawsuit against the MTA in 2017 for violating the Americans with Disabilities Act. But the recent death of a woman who fell down a flight of subway stairs in Midtown Manhattan while carrying her baby in a stroller has put another spotlight on subway accessibility and how it affects a wider group of commuters. (The cause of death is currently under investigation.)

Only about a quarter of the MTA’s subway stations are currently accessible, according to a July 2018 report from the New York City Comptroller’s Office. Of New York City's 122 neighborhoods served by the subway system, 62 do not have a single accessible station. Of those 62, 19 are in the Bronx, 26 are in Brooklyn, 7 in Manhattan and 10 in Queens. That ranks New York City’s metropolitan rail system dead last in the country, in terms of system-wide accessibility.

A recent study from the TransitCenter foundation and Hunter College shows that a wide variety of people with diverse needs seek out elevators during their travels through the subway system.

“Obviously elevators are utterly essential for people with disabilities,” said Colin Wright, Senior Advocacy Associate at TransitCenter, which "works to improve public transit in ways that make cities more just, environmentally sustainable, and economically vibrant." According to Wright, "what [we] found was most people using elevators are parents with strollers, seniors who have difficulty walking, and even people carrying large packages."

But despite the demand, elevators at subway stations have been poorly maintained. In 2018, TransitCenter worked with Hunter College to send Sociology and Urban Planning students out to observe subway elevators at 64 stations, spread across Queens, Brooklyn, Manhattan and the Bronx. The observation windows included weekdays and weekends, peak hours and off-peak hours. All told, students observed and took notes on 10,500 passengers using elevators.

There were two questions at the heart of the study: Who benefits from elevators in the subways, and are those elevators passibly-pleasant environments?

The answer to the latter was no. The study found that many elevators appeared to be unclean: a third of them were said to have “noticeable” odors, most frequently being that of the smell of urine, and only three-quarters were determined to be “well lit.”

Riding an elevator also proved to be a significant time suck. The median time for a one-way trip on an elevator was 27 seconds, as recorded by the students. That time did not include waiting for the elevator to arrive, which many students noted was a turn-off to passengers and often led to people abandoning their wait.

As for who uses the elevators, the study found the distribution skewed toward people carrying large packages, followed by senior citizens. 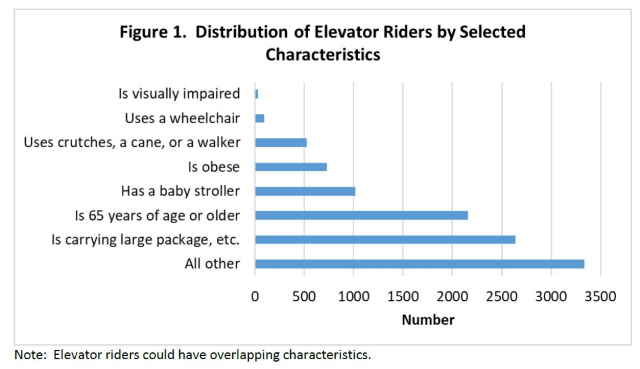 The student observers also made a note of which stations had escalators in addition to elevators. They found that, in the absence of an escalator, use of elevators rose by a factor of about 3.5 for obese people and by 2.5 for people using a cane, crutches or a walker.

Wright said he hopes the study’s findings prompt everyday riders and the New York City Transit authority to consider the diverse group of users who rely on and benefit from elevators.

“Station accessibility is not a ‘nice-to-have.’” said Wright. “It’s an essential part of any subway system.”

Monday’s incident prompted many people to reflect on times when a dearth of elevators failed them or other commuters.

There isn’t a New York mom who hasn’t stared down those subway steps with a stroller. You can either give up the subway (not an option for many) or stand there and hope for help. https://t.co/JNesBH7nVi

New York is a city of elevators that lead up, up, up, into penthouses and conference rooms, but very few lead down into the subways, and those that do smell like bathrooms and feel like death traps. See a mother carrying her stroller down the stairs? Help. https://t.co/W8z0TvwDFL

There is no city more inaccessible than NY. Stairs, narrow passageways, broken elevators, everywhere. It’s a gauntlet for anyone with a different kind of body. So stressful.

There are two up escalators but no elevator at the 7th Avenue B/D/E station at West 53rd Street, where Malaysia Goodson fell down the stairs with her child on Monday night. The MTA called the fatal incident “a heartbreaking tragedy,” and said it is working with police to investigate the cause of death. (Goodson's baby was not seriously injured.)

In response to the study from TransitCenter and Hunter College, an MTA spokesperson on Tuesday said improving accessibility is one of NYC Transit President Andy Byford’s main pillars. Byford has laid out plans to add elevators to at least 50 stations in the next five years as part of his Fast Forward initiative. Within five years, Byford has pledged that no one will be more than two stops away from an accessible station.

As for elevator cleanliness, the spokesperson said nearly 50 additional station cleaners who will address elevators have been hired under the agency's Subway Action Plan.

Wright said Monday night’s fatality is a reminder of the urgency to make more stations accessible and of the importance of helping fellow riders.

“Next time you’re passing a parent with a stroller, make sure to pitch in and help because they might have no other option besides the kindness of strangers to get into stations,” he said.

For more on this story, listen to Shumita Basu's segment on WNYC:

#hunter college
#subway
#subway elevators
#subway stairs
#we the commuters
Do you know the scoop? Comment below or Send us a Tip