A Spitzer Petitioner's Tale: $1,600 To Get Signatures For "A Schmuck"

The text message forwarded from a friend of a friend had all the classic signs of a scam; ALL CAPS, asterisks, and a fantastical promise: $800 a day to gather signatures for Eliot Spitzer's nascent campaign for Comptroller.

The day before, I had been let go from my job as an unpaid intern for a Queens councilmember. The truth is, I respected Spitzer. I had read Peter Elkind's book about him and the powerful Wall Street cabal that brought him down. Alex Gibney's documentary, Client Nine, was marvelous. Spitzer was someone who pissed off the wrong people and paid the price for going after unethical behavior.

Also, he was going to pay me $800 a day. I would have done it for a lot less. I hopped on the train and headed for the address given in the text message, a five-story pre-war residential building on West 12th Street.

As I entered the designated apartment, a large blonde man who took his fashion cues from Mad Men handed me a stack of petitions. My supervisor was short on guidance. Between making phone calls, answering texts, and emailing, he handed me a pile of petition slips, and quietly confirmed the $800/day rate. One rule: make sure they are registered Democrats. After a perfunctory “Don’t talk to the media,” I was sent out. The Occupy Wall Street chant, “This is what democracy looks like!” was ringing in my ears.

Due to the high pay, I felt obligated to get at many signatures as I could. The West Village has many aging Jewish women and gay couples. These are my people. I realized the trick was to start with the most potent part to draw people in. “Hi, I’m with Eliot Spitzer for Comptroller of the City of New York. Would you like to sign our petition to put him on the ballot?” has a LOT of syllables. So I tried innumerable permutations of my pitch.

Then I started barking, “SPITZER! SIGN FOR SPITZER!” It worked. Many people stopped and signed. Others told me I was crazy.

"You must be kidding."

"You must be joking."

"I'd never vote for a hellion!"

I was also insulted with what seemed like 30 different Yiddish words. Who knew Yiddish could be so versatile? 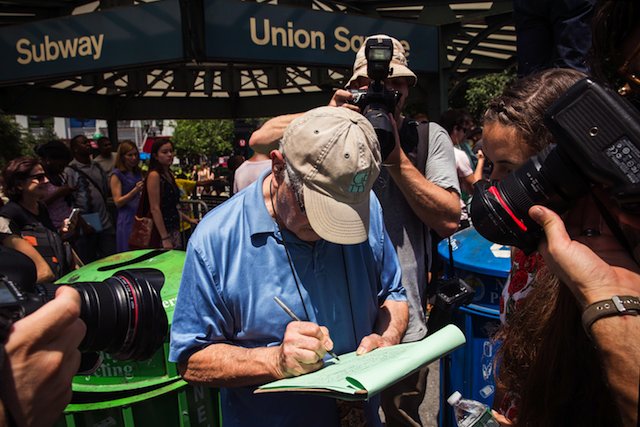 Even if I got someone to sign, there are many many hurdles for a legitimate signature to be accepted by the Board of Elections. A person has to legibly fill out the date; their signature; their full printed name, the first line of their address with the words East, West, Avenue, or Street, all written out; city; zip code; and county. This is not as easy as it sounds.

In addition, they have to live in the five boroughs, be registered Democrats, and could not have already signed for Spitzer’s opponent, Scott Stringer. People forget directions, especially when they’re running off to meet friends. Plus, there is very little room to write this information in on the form, so their writing is bound to be messy. To lighten the tension, I joke that the petition is only slightly more complicated than filing for taxes. I mostly get blank looks. Petition humor is hard.

Best of all was seeing all the looks on people's faces. The tightening of lips in anger. The arcing of eyebrows in amusement. The smiles. The 15 different looks of disgust. But I was doing well. I was signing people up. In my two days for the campaign, I collected over 200 signatures. The brief connections with strangers became addictive. The craziness at Spitzer campaign headquarters afterwards felt optimistic. I thought, I’m actually pretty good at this job. Maybe I’ll stick around.

Some people were on the fence, and I offered to answer any questions they had. I could use my knowledge of Spitzer’s record to help with his campaign. I was no longer a human clipboard holder. I reminded people of his role as the "Sheriff of Wall Street," and that his record made him the enemy of the Albany establishment.

A woman with a stroller countered my arguments with the fact that Spitzer cheated on his wife with a prostitute. Mothers are tough to convince. I cannot deny his mistakes, nor are apologies effective. So I say, “All politicians screw you. At least Spitzer paid for it.” She signed.

A campaign rep told me to wait for an email with instructions for getting my $1,600. I've yet to fill out a W-2. I'm still waiting.