A-Rod "Got Pulled in by the Dark Side" (Madonna) 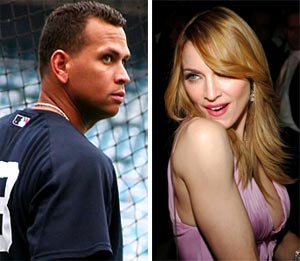 Alex Rodriguez's ex-trainer tells the Post that the superstar athlete is totally besotted--or something else--by Madonna, "Alex, God bless him, is lost...I think he got pulled in by the dark side, if you can say that nicely. He's totally brainwashed."

Dodd Romero, his wife, and their daughter spent the past few days in Paris with A-Rod's wife Cynthia, and his revelations supported the "Cynthia thinks Madonna brainwashed A-Rod" line previously mentioned by the Daily News, by way of Kabbalah. Romero went onto to say, "He's more infatuated with the fact he's with an icon instead of realizing what's important, which is family and truth." He also added A-Rod would "be in the gym and if a Madonna video would come on, he'd go into a trance,"

Others have said A-Rod only spent 10 minutes with baby Ella and Cynthia in Mami before heading back to NYC and Madonna, and now the layout and privacy of Madonna's full-floor Central Park West apartment are being analyzed. One resident told the Daily News' Jo Piazza, "Her apartment spans the whole floor, so he used the back entrance around the corner and the back elevator. Almost no one ever saw him until, one day, he showed up in the lobby."

C-Rod's mother told the Daily News, "I'm not mad at him, I'm sad for him. Alex has been a member of our family for 13 years. They're both our children, and I'm sad for both of them." As for Madonna, she's not talking (and reportedly wants leaks to tabloids from A-Rod's side to stop) but her brother is, in a tell-all book. While Christopher Ciccone doesn't delve into the A-Rod affair, he does say Madonna kissed a surprised Gwyneth Paltrow.