A-Rod Gets Visit From Daughter, Grief from Toronto 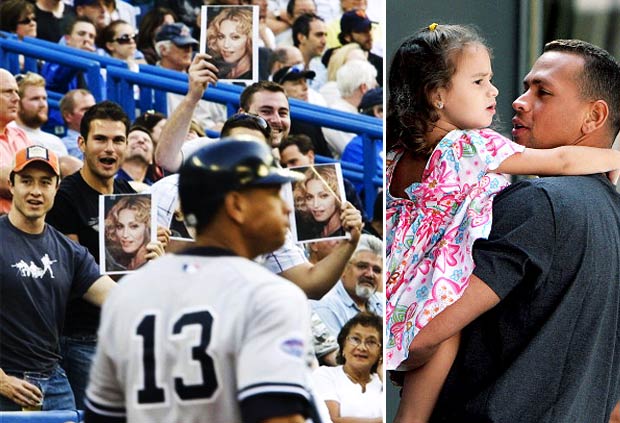 Yesterday, Yankees slugger Alex Rodriguez got a visit from his three-year-old daughter Natasha. Wife Cynthia Rodriguez, who recently filed for divorce, brought their eldest daughter to Toronto where the Yankees were playing the Blue Jays, and photographers captured A-Rod happily carrying Natasha into the Park Hyatt.

While a friend of the couple told the Daily News, perhaps in an effort to tamp down the overload of nasty details and accusations, "It was very amicable. Alex, Cynthia and Natasha spent time together. The mood between the parents was cooperative. They both agreed to go forward with the separation. But they're doing everything to see to it that the separation has the least impact on the children." Their two-month daughter Ella remained in Florida (she has a cold and flying wasn't advisable).

However, Blue Jays fans decided to give A-Rod a hard time, by flashing photographs of Madonna during the game. (C-Rod's lawyer claims that A-Rod "emotionally" cheated on his wife with the superstar singer.) A-Rod has been skidding lately, but manager Joe Girardi doesn't think the scandal is distracting his third basemen.