A Rare Peek Inside The Penn Station Central Control Room

Amtrak offered a rare glimpse Tuesday of Penn Station Central Control, a dimly-lit, NASA-esque room where dispatchers seated beneath a massive, rear-projected overview screen have manually directed more than one thousand trains daily since 1994: from Philadelphia through Penn Station and on to New Rochelle.

The location of PSCC is strictly guarded for security reasons, and today's press tours—Amtrak's largest to date—were conducted from the elevation of an upper-floor conference room, behind glass, to avoid distracting sixteen on-shift dispatchers. Amtrak New York Deputy General Manager Steve Young drew back thick curtains at the start of the tour to reveal the command center below, giving this reporter the odd sensation of observing workers inside a fish bowl.

The left side of the room is dedicated to Amtrak, while the right side is split between Amtrak and the Long Island Railroad. New Jersey Transit has one on-site liaison who meets with an Amtrak manager three times daily to review delays.

The rare tour came in the midst of ongoing emergency repairs at Penn Station, which are expected to last through early September and have brought heightened scrutiny to Amtrak. The station has hosted multiple behind-the-scenes tours since Governor Andrew Cuomo cast public doubt on Amtrak's ability to maintain its own infrastructure.

Young said Tuesday that the control room has been relatively calm during rush hour this summer, since trains are running on a reduced schedule. During a typical weekday, the Long Island Railroad runs 583 trains through Penn Station, New Jersey Transit runs 363, and Amtrak runs 140. This summer, while crews work to repair aging tracks, LIRR has 547 weekday trains, NJTransit has 294, and Amtrak 117.

"There's a little catch-up time," Young said. "If something happens, like a switch [malfunction], it does delay the two or three trains that are in the station, but it doesn't snowball into the whole rush hour being a disaster, as it does when there are 1,300 trains running."

"But it makes [dispatchers'] lives a lot more difficult on nights or the weekends," Young added. "Because we take even more tracks out of service. We'll have two trains with 1,200 people loading or unloading on the same platform, and that delays the trains."

Amtrak, LIRR, and NJTransit trains appear as red boxes moving along green and blue tracks on the massive overview screen, their exact positions relayed to dispatchers as trains roll over circuits spaced evenly along tracks between Pennsylvania and New York.

Young said that dispatchers train for roughly two years before they are qualified to control a section of track. On any given shift, one person manages all of the trains passing through Penn Station's A-interlocking, the tangle of tracks that shuttles trains into the west end of Penn Station. A coworker, sitting at a nearby cubicle, sets signals for all of the trains passing through the East River tunnels. Dispatchers eat desk lunches in the windowless control room, each sitting before at least five computer monitor screens.

According to Young, there would be little need for dispatchers to communicate with train engineers if the schedule ran steadily without interruptions. But more often than not—thanks to a track fire, police activity, a signal malfunction, or overcrowding—trains will be delayed and the dispatcher will have to make a quick decision, then radio information to the impacted train engineer.

"Which track is available, whose train goes first," Young explained. "[Say] he's got a Septa train due off... at Trenton, and a transit train due in—who do I let go [first]?" 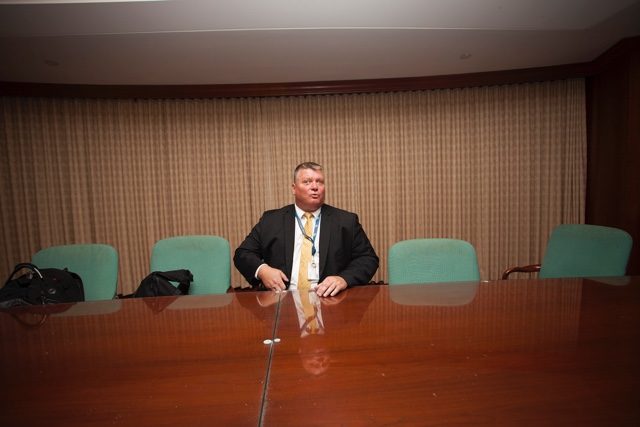 Young addressing reporters. The windows overlooking the control center are behind the curtains. (Jake Dobkin / Gothamist)

Young also detailed how dispatchers respond during a derailment.

"It's calm chaos, if you will," he said. "If a train derails... the dispatchers are going to see what section of the rail is affected by the derailment by the overview screens: which switches are flashing, which routes are available, which routes are not available."

Dispatchers wait for the impacted train to be evacuated before signaling to other trains in the station to stop and back up.

"After they've got that all taken care of, everyone starts to put a plan together of how much service we can support—how many trains we can bring into New York," Young added.

When a NJTransit train derailed in Penn Station on April 3rd, injuring five people, "it probably took an hour to get all of the folks around it out of the tunnel and into the station."

Amtrak's control center hardware was developed in-house, according to Young, and requires around-the-clock on-call maintenance. The same basic technology has operated since the mid-1990s. "This system could run forever," Young said, though Amtrak is seeking to replace it in the near future with less costly technology.