A Rare May Nor'easter 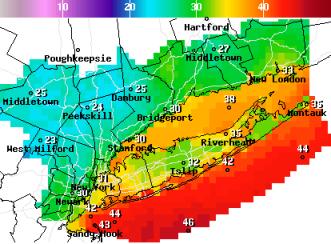 If it were happening in March today's nor'easter would be shutting the city down. Alas it is May and twenty degrees too warm. Instead of a snow day lazily spent at home we have to contend with wind, rain and flooding. Drat!

Judging from the radar map, there's a band of heavy showers about to skim the city from the southeast. Once that passes the rain will start to diminish and by later this afternoon there will only be a chance of scattered showers.

The wind, there is a wind advisory in effect until 5 p.m., should last all day and into the night. Winds will be 20-30 miles and hour with gusts to 50 mph through this afternoon. A coastal flood advisory is also in effect through this evening as the easterly breezes will push water onshore.

Tomorrow's weather will be much calmer than today's. While it will still be breezy, the skies should be mostly clear and the high around 70 degrees. The wind diminishes by Wednesday when it will be sunny and 75.
Wind gust map from the National Weather Service

#flooding
#nor'easter
#rain
#weather
#wind
Do you know the scoop? Comment below or Send us a Tip