A 'Prohibition' Approach To NYC's Opioid Crisis Only Makes It Worse, Advocates Say

This spring, after announcing that his office plans to invest over $143 million to combat New York City's worsening opioid crisis, Mayor Bill de Blasio defended his decision to direct close to half of that money to the NYPD.

"The NYPD piece is important because the presence of heroin is a discrete and specific problem," the mayor told New York 1's Errol Lewis in May. "Remember, fentanyl has really supercharged the situation. It's this chemical added into heroin, and that has to be interdicted by the NYPD and other partners because it's really profoundly dangerous and deadly."

While City Hall has been receptive to non-punitive strategies—distributing naloxone kits widely, opening health clinics, training homeless shelter staff in treating an overdose—his administration has maintained that reducing the supply of heroin and its deadly, low-cost substitute fentanyl is equally important. The bulk of roughly $70 million in opioid-related funding for police through 2021 will pay for 84 new detectives and 50 new lab staffers to investigate overdoses and, the logic goes, trace the subtance from the user back to dealer.

"On every overdose, whether it's a death, or whether it's a save, or somebody that we find out subsequently to the OD, we're gonna conduct an interview," NYPD Commissioner James O'Neill said earlier this year. "And then work our way up the food chain."

The city's plan, former users and advocates said Thursday, is self-sabotaging at worst. Money that might have gone towards non-punitive solutions could actually chip away at progress already made. "People will be afraid to call 911," said VOCAL-NY co-director Jeremy Saunders. Adding to the chilling effect is the threat of a murder charge. This June, Staten Island man Stephen Cummings became the first New Yorker ever to be charged with manslaughter for allegedly peddling a lethal dose of fentanyl.

"Prohibition doesn't work," Saunders said. "In this country we prohibited alcohol. What happened? Stronger alcohol and a massive black market. Now, we no longer have a heroin problem, we have a fentanyl problem."

According to the New York City Drug Policy Alliance, policing opioids incentivizes cutting heroin with fentanyl because "there is more incentive for producers and distributors to minimize costs and maximize profits."

A 2011 Journal of Public Health report found that, across the country between 1992 and 2002, increases in drug-related arrests did not result in a decrease in drug use. 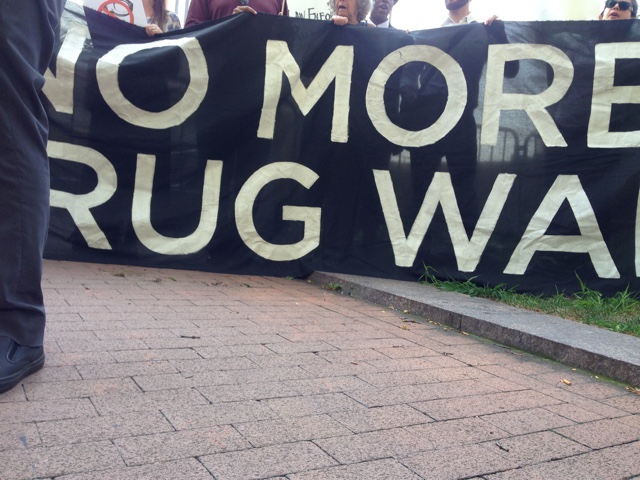 Shantae Owens, 42, is a former heroin user of 20 years and organizer with VOCAL-NY. He said Thursday that he's noticed a positive shift in how the NYPD treats drug users since the 1980s. "I applaud having any of the police department try to combat overdoses," he told Gothamist. "I grew up in a time where it wasn't about taking someone for help. It was pretty much, you would be detained."

Still, he added, the NYPD's pledge to target dealers like Simmons and, more recently, four men accused of running a drug mill on the Upper West Side last week, is a losing battle.

"I'm glad to get these drugs off the street because they are obviously dangerous," he said. "But we have to understand drugs are here. They're not going nowhere. They will probably forever be around. So... how are we going to prevent death?"

Advocates have pushed for supervised injection facilities, which City Hall agreed to study last fall. They've also said the $70 million would be better off with the Department of Health, where it could be spent on fentanyl-testing strips that users can use to check their batches for deadly strains; additional funding for needle exchange programs; training for shelter residents to administer naloxone; diversion programs for misdemeanor drug possession arrestees like one recently established on Staten Island, where the crisis is acute.

"If we had $70 million to invest in the South Bronx," she added, "would it be one of the leading counties in the United States for overdose deaths?"

The Department of Health deferred to City Hall for comment, and declined to say whether the agency would welcome the $70 million currently allocated to the NYPD.