A Plague Upon All Our Houses: Rats 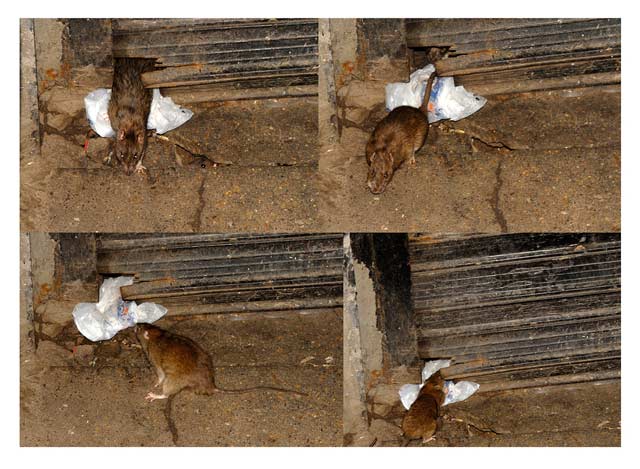 The common rule of thumb is that there are eight or nine rats for every human being in New York City, which means a scurrying verminous population of 64-72 million lurking in walls, below streets, in trash cans, and sometimes in plain sight. Being a rat catcher or, better yet, a rat exterminator is a profession that will never end, and the NY Times spoke to some exterminators about the unwinnable battle.

Mr. Cruz, who started working as an exterminator in 1996, opened his business five years ago, and in his opinion, there is a difference between Manhattan and Brooklyn rodents. “Manhattan rats look like cats, not like rats,” Mr. Cruz said. “Brooklyn rats look like rats.”

Asked why he and his assistant chose this line of work, Mr. Cruz replied: “It’s for the money. There will always be work for us in this city.”

In 1944, Joseph Mitchell wrote about rats in NYC, and described the brown Norwegian rat (rattus norvegicus) in the following terms.

In addition to being the most numerous, the brown rat is the dirtiest, the fiercest, and the biggest. "The untrained observer," a Public Health Service doctor remarked not long ago, "invariably spreads his hands wide apart when report the size of a rat he has seen, indicating that it was somewhat smaller than a stud horse but a whole lot bigger than a bulldog." They are big enough, God protect us, without exaggerating."

Mitchell continued to write that "Veteran exterminators say that even they are unable to be calm around rats. 'I've been in this business thirty-one years and I must've seen fifty thousand rats, but I've never got accustomed to the look of them,' one elderly exterminator said recently. 'Every time I see one my heart sinks and I get the belly flutters.'"

#brown rats
#disease
#exterminators
#nyc
#rats
#vermin
Do you know the scoop? Comment below or Send us a Tip