A New Yorker's Guide To The Women's March On Washington

The Women's March on Washington—a massing of people marginalized throughout President-elect Donald Trump's campaign, planned for his first day in office—was a reliable conversation-starter during the holiday weekend. Over ravioli with my grandmother, aunt, cousin and sister: Were we planning on going? Did we have friends who were already committed? What about the concurrent marches planned for the cities where we live? Answers ranged from "Yes, but" to "Maybe, but." And the buts were legitimate: How will I get there? How much will it cost?

In an effort to clear this up, Gothamist spoke with the organizers about logistics, as well as whom—and what—organizers plan to march for. The Women's March may be the largest permitted event planned for inauguration weekend, but it won't get in the way of Trump's procession. Meanwhile, there are protesters who think interrupting the inauguration is essential. We spoke to a few of them, as well.

WHAT ARE THE MARCHERS RALLYING FOR?

Organizers have been explicit that the Women's March on Washington is not a specifically anti-Trump protest. Instead, they're presenting it as a march for fundamental human rights—a nod to Hillary Clinton's oft-quoted "human rights are women's rights, and women's rights are human rights" line from a 1995 speech in Beijing. These rights include reproductive health, childcare, and jobs. Also, the right to live free of sexual harassment and gender, race, and sexuality-based discrimination.

"We understand that [Trump] is a symptom and not the disease," spokeswoman Cassady Fendlay told Gothamist. "This is a bigger thing than just the presidency."

The march is currently expected to draw more than 200,000 participants. Planned Parenthood recently committed as a partner, along with more than 70 other groups, including the Center for Reproductive Rights, Amnesty International, and the NAACP.

Despite the official message that the march isn't "anti-Trump," some participants are viewing it as a more direct response to the president-elect. "We felt that our issues were sidelined by the candidate during the entire election process," said Jean Bucaria, deputy director of the New York chapter of the National Organization for Women. "The fact that so many women came forward with allegations of sexual assault and non-consensual assault: It was an outrage."

The category "women," and whom it represents in the context of the Women's March on Washington, has been controversial. An earlier name, "Million Women March," drew criticism because that was the name of a 1997 march organized by a group of black women as a response to a perceived failure of mainstream feminism to address the needs of women of color. Charity Avé-Lallemant, a black woman and initially a head Maryland organizer for the march, stepped down in November citing the lack of minority women in leadership roles.

"The reality is that the women who initially started organizing were almost all white," organizers wrote in a November statement. Since then, they've been explicit in their mission statement to welcome women (and men) regardless of race, ethnicity, gender expression, and sexual identity.

Seasoned activists Tamika Mallory, Carmen Perez and Linda Sarsour, all women of color, have also joined as national co-chairs of the march. In 2015, the three led the 250-mile New York-to-Washington March 2 Justice for criminal justice reform.

Brittany Oliver, a women's rights activist in Baltimore, who is black, said the effort was too little, too late. "Recruiting women of color at the last minute is a perfect example of what tokenizing looks like," she wrote.

"This march is about what [Trump] represents," Mallory wrote in Essence this month, "as a powerful rallying figurehead to misogyny and a silent support of white supremacists, sexists, and those who feel entitled to try and legally tell me what to do with my body." 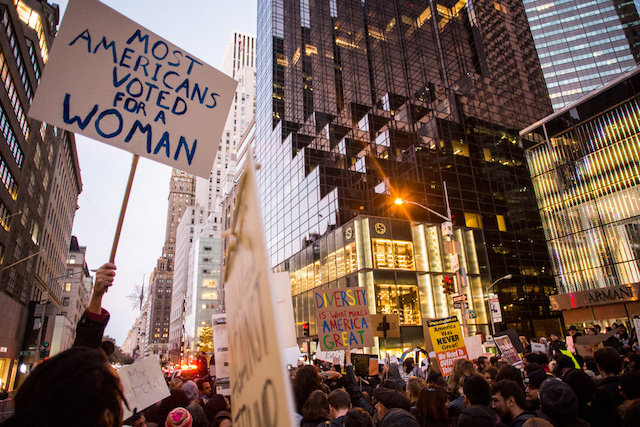 HOW CAN I GET THERE FROM NYC?

Seats on the fleet of relatively affordable charter buses organized by the Women's March New York chapter were all booked up by December 27th. "I don't think that anybody in New York was actually prepared for the amount of demand that was going to happen," said coordinator Karen Waltuch. She urged people to keep checking back here, just in case.

For those left in the lurch, the New York chapter of ANSWER Coalition (Act Now to Stop War & End Racism) still has seats available on buses from Jackson Heights, East Harlem, and Union Square. According to the organization, a Brooklyn pickup location is also in the works, likely near the Barclays Center. These seats cost $50 roundtrip, and ANSWER is currently crowdfunding to subsidize a limited number of $25 seats.

These buses will be leaving Friday morning, at 1:00 a.m., for ANSWER's own Inauguration Day protest. "We're trying to get there right when the check points open up, because it's important that protesters be there as early as the Trump supporters," organizer Ben Becker said. He anticipates that many protesters will end up staying in DC overnight, even though the ANSWER buses will return Friday night.

A not-for-profit website Marchmatch has also been set up to match people in need of a ride, ticket money, or even overnight stay with D.C. hosts. Lauren Bugeja, a New York City-based designer at Google, co-launched the website a few weeks ago, when she noticed people attempting to set up ride and home sharing in the Women's March Facebook group. "We want people to be able to say, 'Hey, I have a bunch of bus seats,'" she explained.

Bugeja urged users to be cautious, as they might be with any online transaction. "We've had to keep a close watch on the site, because there has been a lot of nefarious activity of people pretending they can offer a ride," she said—apparently to deter marchers.

For those with a larger travel budget, Amtrak recently announced that it's expanding Northeast Regional service between January 20th and 23rd. But that doesn't mean the ticket options will be comprehensive. "There are still tickets, yes, but maybe not for long, and maybe not at the most desirable time," said Amtrak spokesman Craig Schulz on Wednesday.

WHERE WILL MARCHERS CONVENE?

Participants in the Women's March will gather at Independence Avenue and Third Street Southwest, near the Capitol Building, at 10:00 a.m on the 21st. The march will open with a series of speeches (speakers to-be-determined) and proceed down Independence Avenue. The end point is being withheld for security reasons, according to organizers. The march is expected to conclude before dark. 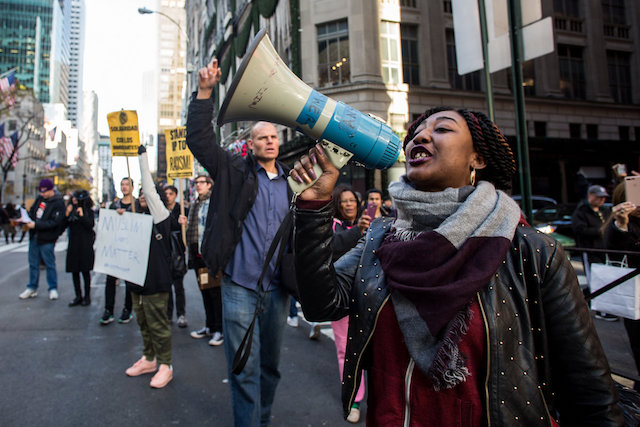 WHAT IF I WANT TO SPEND THE NIGHT?

"In a good-will effort, we've been encouraging everyone who's coming from New York to make this a day trip," said Waltch, the NYC organizer. "If only because we know there are people coming from Upstate and California and Texas and they should get first dibs."

Still, there are options for those who want to spend the weekend, or arrive Friday to protest on Inauguration Day (more on that below).

For example, DisruptJ20, which is planning to interrupt the inauguration ceremonies, is organizing housing with priority for "Black & Brown, trans & queer, and disabled folks," according to its website. Organizers told DCist that they're currently planning to accommodate up to 1,000 people, offering "mass housing" at a DC church from January 19th through 21st. More on that here.

Airbnb has reported record bookings for the DC area. Last month, the company projected 10,000 guests in the city (seven times the number of Airbnb guests during the 2013 inauguration), paying an average of $125 per night. AirBnb is planning to update its cost projections on January 9th.

WHAT IF I CAN'T MAKE IT, BUT WANT TO SHOW SOLIDARITY?

"One of the things we were really trying to emphasize for folks is going to DC isn't the be-all-end-all," said Adrienne Verrilli, of spokeswoman for Planned Parenthood. The week after the march, on January 30th, the organization is hosting a lobby day in Albany to push for more comprehensive abortion and contraception access in New York State.

There are also more than 30 sister marches planned across the country for January 21st, including one in NYC.

WHAT IF I WANT TO DISRUPT INAUGURATION DAY, AND DENOUNCE THE PRESIDENT-ELECT?

Some protesters are planning to send a more explicit anti-Trump message, and physically get in his way. Among them are ANSWER and DisruptJ20, which will be hosting an "action camp" the weekend of January 14th. DisruptJ20 is expecting thousands of protesters on Inauguration Day, gathering at McPherson Square Park at 10:00 a.m. Unlike Women's March participants, these protesters will not stick to a police-approved route (with the exception of a noon rally at Columbus Circle for those who don't want to risk arrest). Organizers have stockpiled information on protesters' rights. From the DisruptJ20 website:

We must take to the streets and shut down, protest, blockade, disrupt, intervene, sit in, walk out, rise up, and make more noise and good trouble than the establishment can bear. The parade must be stopped.

"Let's say 100,000 people show up to the Women's March," Legba Carrefour, a member of the D.C. Counter-Inaugural Committee, which is organizing DisruptJ20, told DCist. "One-hundred thousand at the Women's March is going to have a lot less impact than if you get 1,000 people showing up and doing blockades. We can do a lot with few people."

"To be there the day after [the inauguration] allows Trump to create his own imagery and his own narrative about what that day is," Becker, the ANSWER organizer said. "We don't want to concede that space."

#donald trump
#guide
#protest
#rally
#trump
#washington D.C.
#Women's March on Washington
#original
Do you know the scoop? Comment below or Send us a Tip