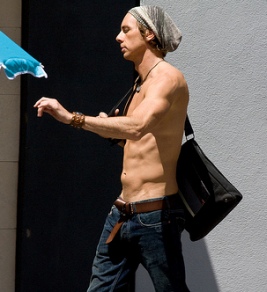 While the man who suspected of stealing women's purses during the morning subway commute has been caught, it turns out there's another fiend with a similar penchant. The Post says a "well-dressed, well-coiffed daytime purse-snatcher has been targeting unsuspecting women as they lunch at Midtown tourist spots."

The thief, who seems to be 35-45 years old and between 5'11" and 6'1" with brown hair, is connected to eight robberies in recent weeks, looking for chairs with women's handbags hanging on them. The Post explains, "surveillance tapes show the scoundrel on April 21, at Chef Yu near Penn Station, casually placing his jacket on the back of a chair, grabbing the handbag by the strap and strolling out." Ladies--keep your purses close to you!

Other restaurants he's hit: The Bread Factory Cafe on Seventh Avenue at 36th Street, Case Europa on Fifth Avenue at 44th Street, Café Duke on Broadway between 40th and 41st Streets, and Koryodang Bakery on West 32nd Street near Broadway.

Photograph of Dax Shephard (who is NOT a suspect), shooting When in Rome with a man purse, by nyer82 on Flickr

#crime
#lunch
#lunch time robber
#purses
#robbery
#theft
Do you know the scoop? Comment below or Send us a Tip
A new Gothamist is coming! We’ve moved comments over to our beta site. Click here to join the conversation and get a preview of our new website.