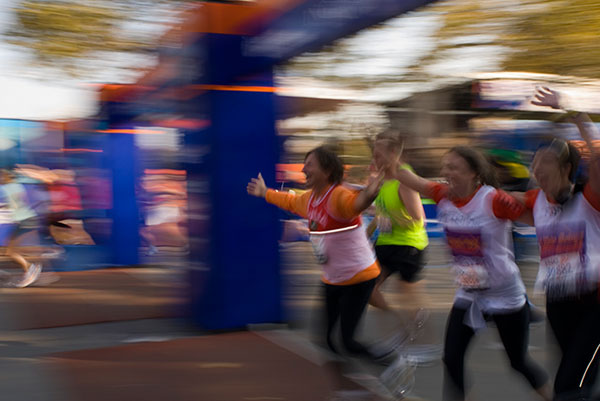 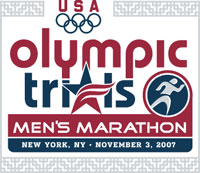 Marathon fans, your time is here because this weekend, there are two 26.2 mile races in the city. In addition to the New York City Marathon on Sunday, Saturday is the USA Olympic Trials for the 2008 Olympic Men's Marathon.

Saturday's Olympic Trials will feature the country's best long distance runners as they contend for the first spots on the 2008 U.S. Olympic track and field team. Starting at 7:35 a.m., the field of 128 runners will begin the race at Rockefeller Center at 50th and 5th Ave., make their way through midtown, head into Central Park for the course's loops and eventually finish at Tavern on the Green. The Road Runners have a map of the course (.pdf file) as well as a spectator's guide to the race. The start of the race will be shown on WNBC's Today In New York and a highlight show will air at 2 p.m. Favorites for the three tickets to Beijing are Abdi Abdirahman, Meb Keflezighi, and Ryan Hall.

With the Olympic Trials on Saturday, there won't be any top-flight American men running on Sunday - then again, no American man has won the NYC Marathon since Alberto Salazar in 1982 (no American woman has won the race since Miki Gorman in 1977). Back this year is defending men's winner Marilson Gomes dos Santos of Brazil, who the lead pack probably won't ignore this year. The list of contenders include last year's 2nd place finisher Stephen Kiogora (Kenya), 2002 winner Rodgers Rop (Kenya), Hendrick Ramaala (South Africa), 2003 winner Martin Lel (Kenya). Also running again this year is Lance Armstrong, who finished just under three hours last year.

The impressive women's field is lead by Catherine Ndereba and Paula Radcliffe. Ndereba (Kenya) is looking for her first win in NYC (she's a four-time winner in Boston and a two-time winner in Chicago) and has finished in the top-three in 16 of the 17 marathons she's competed in during her career. Radcliffe (Great Britain), the 2004 NYC winner, is competing in her first marathon in 2007 after giving birth to her daughter in January. The two hold 2nd and 3rd fastest marathon times in New York City (after Margaret Okayo in 2003) and the top-two fastest women's marathon times ever. Also contending are two-time defending champion Jelena Prokopcuka (Latvia), who is clearly not to be overlooked, Gete Wami (Ethiopia), and former two-time champion Tegla Loroupe, who is making her return to New York after a two-year absence.

A nice sub-plot to the women's race is the World Marathon Majors series. In its first year, the women's title will be decided here in New York with the winner getting $500,000 in prize money (Robert Kipkoech Cheruiyot clinched the men's title earlier this year). Wami is in 1st place with 65 points and Prokopcuka is in 2nd with 55 points. For Prokopcuka to win, she needs to win on Sunday or finish 2nd with Wami finishing 4th or worse.

If you're looking to watch Sunday's marathon in person, there are some different strategies depending on who you want to watch. There are different start times for each group, which is something you want to keep in mind if you want to watch the lead runners. Athletes with disabilities start at 8 a.m., the wheelchair division starts at 9:05 a.m., professional women start at 9:35 a.m. and professional men and open runners start at 10:10 a.m. If you're looking to cheer the masses (which is a great experience and very helpful to the runners), just line up anywhere along the course (map, .pdf file). Some spots, like 1st Ave. in Manhattan, are a lot more crowded than others, but it's hard to miss 37,000 runners. If you're watching on TV, WNBC will start their marathon coverage at 9 a.m. and finish up at 2:30 p.m.

While Saturday's race looks to be really wet, Sunday looks cool enough to avoid a tragedy like the one earlier this season in Chicago. And runners, supporters, and spectators should note that Sunday is also the end of Daylight Savings Time when we turn the clocks back. But in the worst case scenario, you're standing around an extra hour waiting for the race to happen.