A Look at the Bridges in New York City 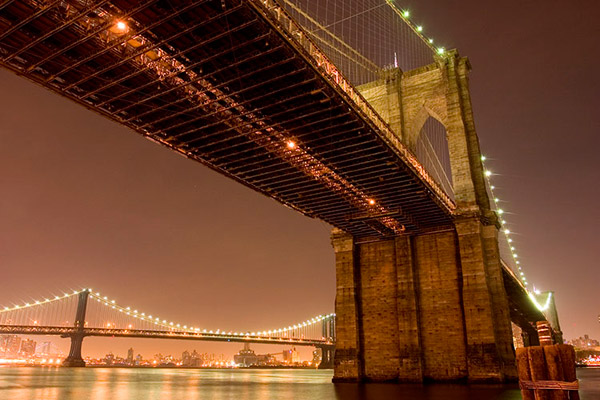 After hearing about the tragic rush-hour bridge collapse in Minneapolis that has claimed at least four lives, we wondered what the conditions of New York City's bridges were. Like the Interstate 35W bridge in Minneapolis, several of our city's largest bridges are undergoing what seems like constant construction. All the East River bridges are either undergoing repairs right now, have plans for the future, just finished construction, or all of the above.

Gothamist looked at the New York City Department of Transportation's 2006 Bridges and Tunnels Annual Condition Report for data on our local outlook. Their 2006 report classifies only three bridges as poor, 456 as fair, 210 as good, and 118 as very good. As shown in the chart above, the number of "poor" bridges has dropped in the past 10 years with repair projects that the DOT has ordered.

What bridges fall into the "poor" category? The 2006 report lists the E. 78th Street pedestrian crossing over the FDR, a section of the Brooklyn Bridge over the B.Q.E. and a bridge near Willow Lake and 76th Rd. in Flushing Meadows Corona Park. The report doesn't specifically say what is wrong with those bridges, but it does list the costs of replacement for each: $2,448,000 for the pedestrian bridge, $725,454,720 for the Brooklyn Bridge, and $2,723,040 for the Willow Lake bridge.

One bridge that isn't in the D.O.T. report is the Tappan Zee Bridge, which is run by the Thurway Authority. The Tappan Zee was built in 1955 and carries 135,000 vehicles a day, but was only built with a 50-year lifespan in mind. A 2001 Times article says the Thruway Authority estimated the rehabilitation cost of the bridge at $1.1 billion. The Authority is currently doing an environmental review of the other options.

The I-35W Bridge, which was built in 1967, carried an estimated 141,000 vehicles a day, a fraction of what the four East River bridges carry. Together, the Brooklyn, Manhattan, Williamsburg, and Queensboro bridges carried 498,213 vehicles a day in 2005. That's on top of any subway passengers the bridges carried. In addition to carrying more people, these four bridges are also much older than the I-35W Bridge - Brooklyn was opened in 1883, the Manhattan opened in 1909, the Williamsburg opened in 1903, and the Queensboro opened in 1909 as well. Each of these bridges are in various phases of rehabilitation projects, receiving seismic retrofitting and structural repairs and rehabilitation, and in some cases the reconstruction of roadways.

Other I-35W information:
- In addition to the four confirmed fatalities, at least 79 are injured and 20-30 people are still unaccounted for. TwinCities.com has video of the collapse.
- Minnesota Governor Pawlenty suspended recovery efforts and asked that all bridges with a similar design be inspected.
- The American Society of Civil Engineers "extends its deepest condolences to the victims, the injured, their families and all others." The ASCE's "2005 Report Card for America's Infrastructure" found that 27% of the nation's 590,750 bridges "rated structurally deficient or functionally obsolete... However, it will cost $9.4 billion a year for 20 years to eliminate all bridge deficiencies. Long-term underinvestment is compounded by the lack of a federal transportation program."