A Little Waterborne Bump and Grind on the West Side 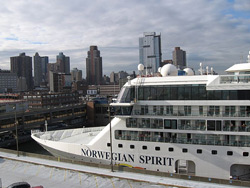 A huge cruise ship was so eager to get to Manhattan this morning that it actually slammed into the island. The Norwegian Spirit--which is a boat belonging to Norwegian Cruise Lines--apparently took a turn too wide and rammed into Pier 90 at 50th St. and 12th Ave. Typical out-of-towners: they never know how to drive in the city!

No one on board was injured and the Dept. of Buildings said that the pier was damaged and in need of structural reinforcement, but not in danger of collapse. Passengers noticed that the parking structure (the pier) was coming up awfully close to the ship, but didn't feel much of an impact as concrete crumbled into the Hudson. It's a testament to how large modern cruise ships are--"Iceberg? What iceberg?"

In addition to the Dept. of Buildings, the Coast Guard and Dept of Emergency Management were also quick to the scene. The Navy SEALS have been camped out at Pier 90 with one of their functional watercraft for Fleet Week, but they fortunately did not have to be deployed.

Norwegian Cruise Lines advertises itself as "Freestyle Cruising." They may want to rein that in a little.

#crash
#norwegian spirit
#parking garage
#pier 88
#pier 90
#west side
Do you know the scoop? Comment below or Send us a Tip