By
Matt Katz
and
WNYC Staff

By
Matt Katz
and
WNYC Staff

Before presidential candidate Donald Trump vowed a “total and complete shutdown of Muslims entering the United States,” before the so-called “Muslim Ban” led to nationwide airport protests, before the Supreme Court affirmed a watered down version of what’s now known as the “travel ban,” Brian Swank and Mehraneh Rayatidamavandi fell in love.

In September 2015, Swank was a student at SUNY College of Environmental Science and Forestry in Syracuse, studying landscape architecture. His professor was working with a visiting scholar from Tehran, Iran. “Who's this beautiful girl, coming from all the way from Iran, to study landscape architecture here?” Swank wondered.

Rayatidamavandi, a PhD in landscape architecture, was on a research scholar visa for the academic year. Quickly enough, Swank asked Rayatidamavandi on a coffee date.

“From the first moment, I thought that he's so sweet,” she said. “He's so caring, he’s so thoughtful. And we are good together.”

Swank remembered thinking to himself: “Wow, this girl is going to be somebody special in my life.”

On Halloween, he taught her how to carve a pumpkin. On Thanksgiving and Christmas, he brought her home to his family. And at the end of the school year, on the front steps of his parents’ house in Poughkeepsie, Swank proposed.

U.S. law required her to go back to Iran for two years before she could apply for a K-1 fiance visa. That would then make her eligible for permanent residency, work and a life in the U.S. by 2018. So the couple spent those two years living apart, meeting up for various vacations, from the Eastern European country of Georgia to Malaysia. As an American, Swank would’ve faced difficulty visiting Rayatidamavandi in Iran, and as a Christian, he is forbidden from moving there and marrying her because she’s Muslim.

Last year they submitted the fiance visa application, complete with background checks on Swank and Rayatidamavandi. In July they went to the United Arab Emirates, both for a vacation and because that’s where Rayatidamavandi had a scheduled interview at the U.S. embassy. (She had to travel there to interview with American officials, because there’s no official American presence in Iran.)

But a month before that, the Supreme Court upheld the third version of the travel ban, which blocks the issuance of a range of visas to citizens of seven countries, including Iran. So even though Rayatidamavandi had previously been vetted and approved to live in the United States for 10 months, this time her visa application was rejected.

Brian described it as “life...on hold.”

“We've got these big dreams, these big plans of having a home here in southern Ocean County [New Jersey],” he said. They both want a family. “I'm just waiting for the most important thing: Her, her to be here.” 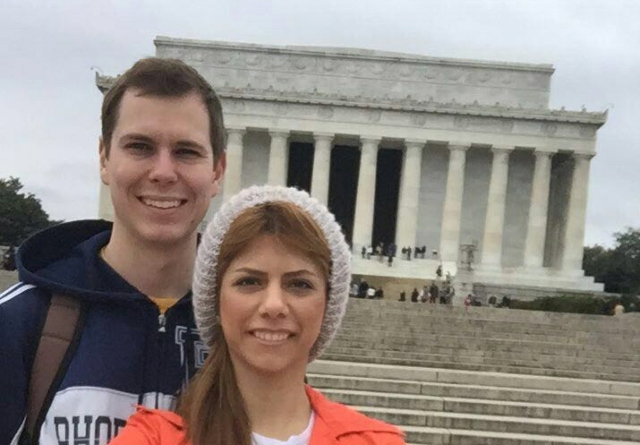 After being denied for the visa, Rayatidamavandi sought a waiver. Such waivers were mandated by the Supreme Court ruling, and have been held up by Trump Administration officials to show that this isn’t a blanket “Muslim ban,” and is only intended to protect the nation from terrorist attacks by foreigners.

The State Department is empowered to determine if the visa denial will lead the foreigner to experience “undue hardship.” Yet just 6 percent were granted waivers from December 2017, when the latest ban was implemented, to October 2018, according to data obtained by Senator Chris Van Hollen, a Maryland Democrat.

“This data paints a clear—and deeply disturbing—picture of the Trump travel ban,” Van Hollen told Reuters. “The administration repeatedly swore to the Supreme Court and the American people that this was not a de-facto Muslim ban and that there was a clear waiver process to ensure fairness. That couldn’t be further from reality.”

By June, an estimated 6,000 spouses will have been separated by the travel ban, according to the Cato Institute.

The wait for those hoping for a waiver is extensive. Rayatidamavandi’s request is in “administrative processing,” according to a letter from the U.S. embassy consular in the United Arab Emirates to Swank’s congressman, U.S. Representative Tom MacArthur, a Republican. The couple must check online to get status updates on her case.

“I'm so helpless,” Rayatidamavandi said. “I don't think there is much I can do about it. It's all in the hands of President Trump.”

A bill to overturn the travel ban is in Congress, but stands little chance in the Republican Senate.

Rayatidamavandi spends her time reading whatever she can find online about her area of expertise—improving children’s vitality through urban parks and playgrounds. She’s not working. She lives with her parents in Tehran. And she said she’s experiencing anxiety.

“I’m an ordinary Iranian citizen,” she said. “I don't have anything to do with politics. It’s not my fault that I was born in Iran.”

Swank lives in Lacey Township on the Jersey Shore and works as a landscape architect on Long Beach Island. He talks on the phone with Rayatidamavandi at least twice a day; she wakes up at 2:30 in the morning to FaceTime with him when he gets home from work.

Waiting is the only thing that they can do.

“I'm saying this to Brian every day, that this is love,” Rayatidamavandi said. “Love doesn't know any boundaries it doesn't know any nationality or anything, it just happens. You fall in love. You cannot do anything about it.”

Update: This article has been reflected to note that Van Hollen is a senator from Maryland, not Connecticut as previously stated.

Matt Katz reports on air at WNYC about immigration, refugees and national security. You can follow him on Twitter at @mattkatz00.

Matt Katz reports on public safety, focusing on decarceration and the equitable enforcement of laws. He has investigated abuse in ICE detention and covered former N.J. Gov. Chris Christie, sharing a Peabody Award for coverage of Bridgegate and writing a book, "American Governor: Chris Christie's Bridge to Redemption." Once upon a time, he wrote a syndicated dating column.