A Goose On The Loose Delays Q Train Service A rogue goose shut down part of the subway system for more than an hour Monday afternoon, frustrating and transfixing midday commuters in Brooklyn.

The bird, a large Canada goose, was first reported by the MTA as being on the southbound tracks near the Parkside Avenue Q stop around 1:40 p.m. Southbound Q trains skipped several stops to avoid the goose, forcing some commuters to either get off at Prospect-Lefferts Gardens and walk, or take the train all the way to Kings Highway in East Midwood.

Meanwhile, the goose made its way south. At 2:40 p.m., it was seen sitting next to an empty beer bottle on southbound Q tracks in the Church Avenue station. NYPD and MTA staff were on the scene at Church Ave to supervise the goose, who appeared to have an injured wing.

Hello, we are still waiting for NYPD to remove the goose - we do not have an estimated time when the goose will be removed. There are buses available on Coney Island Av (B68) and on Ocean Av (B49). You can ask the station agent for a courtesy pass for continuing bus service. ^TS

Just before 3:00 p.m., more NYPD officers arrived, transporting a large pet carrier. After a short chase, an officer caught the goose with an animal control pole and deposited it safely in the carrier.

Just as the officers lifted the goose’s carrier onto the platform, a southbound train arrived at Church Ave and forced all its passengers to disembark.

“This is why I’m late for work,” one passenger said while looking at the goose. “They should give me that and let me cook it.” 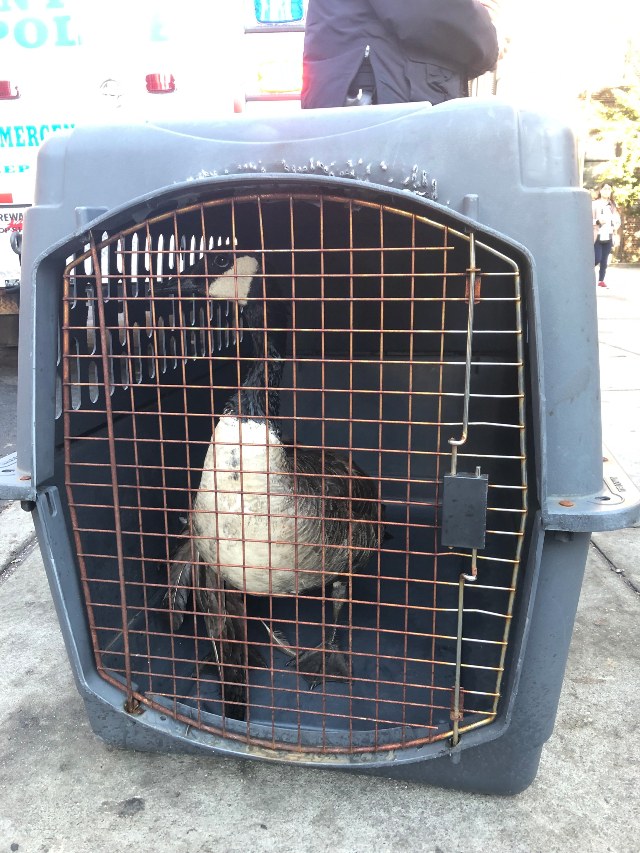 Instead, the goose was carried gently up the subway steps and loaded into a van, where NYPD officers said it would be transported to the ASPCA. The goose’s feathers were a bit ruffled, but it appeared calm.

The ASPCA and the NYPD did not immediately respond to requests for comment about the goose rescue. Asked whether he planned to tweet a photo of the goose, an MTA staff photographer at the scene replied, “I’m going to honk it.” And so it was:

As of 3:14 p.m., the MTA confirmed that southbound Q trains were running again. When contacted by Gothamist, the MTA press office said that their Twitter account "spoke for itself."

#delay
#goose
#MTA
#parkside avenue
#q train
#rescue
#subway
#original
Do you know the scoop? Comment below or Send us a Tip