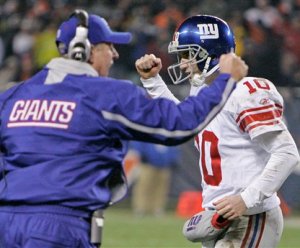 Admit it, sometime early in the fourth quarter yesterday you finally had enough. Enough of watching Eli throw behind his receivers, enough of him committing awful turnovers. You were ready to throw in the towel, give up on Eli and go find another quarterback. And then an amazing thing happened. Eli suddenly became the QB you thought he could be. Down 16-7 with just under 12 minutes in the game the Giants rallied for two touchdowns and won 21-16. Over the two final drives, Eli went 7-9 and threw for 95 yards.

Eli will get a lot of the credit for this win, but the Giants defense deserves a huge share as well. Time and again, the offense put them in tough spots and the defense kept coming up with big stops. They held Chicago to 4 first downs in the second half and kept the Bears out of the end zone at the end of the game.

And so, the Giants are 8-4 and hold a two-game lead in the NFC wild card race. A tough game in Philadelphia is up next, but the Giants will head into it off of one of their best wins in a long time.