A Giant Test: Will the 3rd Time Be a Charm 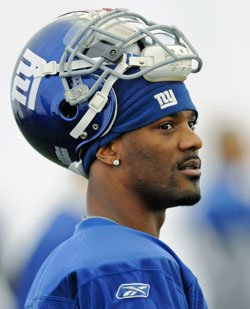 The degree of difficulty is going up this weekend, way up. Dallas finished with the best record in the NFC at 13-3 and dominated the Giants in two games already this season. Only New England had more points than Dallas’ 455 and with Terrell Owens practicing, the Cowboys should be able to score a lot this weekend.

And that will be the challenge facing the Giants on Sunday. It sounds like Sam Madison will be out again, which means Corey Webster is going to have to have another big game. Aaron Ross will need to keep Terrell Owens under control and the pass rush will have to find a way to keep Tony Romo from having time to throw. Dallas has also been tough on defense, finishing the regular season sixth against the rush and 13th against the pass.

Throw in the extra week of rest that Dallas had (enough for Romo, Jessica Simpson, and friends to travel to Mexico) and you can see the odds are stacked against the Giants being able to produce a win this week. They have some momentum and should make it a game, but in the end they will just fall a little short.

Photo of Aaron Ross during practice today by AP/Bill Kostroun; Ross will have his hands full Sunday as he takes on Terrell Owens