A Funny Thing Happened On The Way To the Alibi

Reach out and touch someone - and get fired for it, possibly even if you didn't do the reaching out and touching. The nutty voicemail message left for Bernard Spitzer, father of Governor Spitzer, is reassuring everyone that it's just politics as usual in Albany. The elder Spitzer's lawyers believe that the call was made by GOP consultant Roger Stone, who was recently hired at $20,000/month by NY State Republican (he was consulting with Spitzer's rival, State Senate Majority Leader Joseph Bruno).

While Stone denies that the call came from him, the whiff of scandal was too much for Bruno, so he quickly fired Stone yesterday, saying, "I don’t know what Roger Stone did. Roger no longer has a relationship with the Senate, based on the allegations. Whether it’s true or not, we are, until there’s clarity, severing our relationship.” 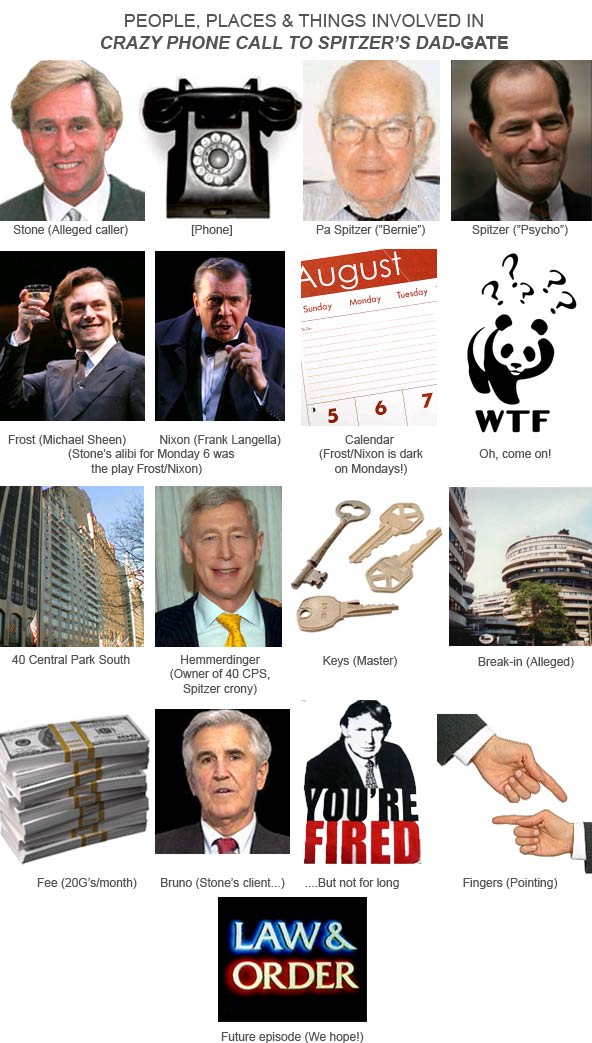 Stone denied making the call (you can hear it here - it includes a man saying "You will be compelled by the Senate sergeant at arms, if you resist, you will be arrested and brought to Albany - and there's not a goddamn thing your phony, psycho piece of s--- son can do about it. Bernie, your phony loans are about to catch up with you.") and claimed (A) that he was seeing the Broadway play Frost/Nixon when the call was allegedly made on August 6 and (B) that someone could have broken into his apartment at 40 Central Park South, because it's owned by Spitzer friend H. Dale Hemmerdinger. In fact, here's Stone's website denying all and even suggesting that Spitzer see Frost/Nixon (too bad it's closing!).

NY Magazine's Daily Intelligencer pointed out that Frost/Nixon is actually dark on Mondays (which August 6 is), to which Stone said, “Well, then I’m mistaken. My wife already reminded me I actually saw the play on a Wednesday. I still recommend the play to the governor.” (Yet he didn't explain what he was doing on August 6.) And Hemmerdinger said, "Stone’s allegations about me are untrue.”

Stone insists that the phone call, which sounds like his voice, must have been made with clips from other interviews he's done. He says he is hiring a former FBI expert to examine the tape. He also draws attention to the scandal involving Spitzer, his father, and a multi-million loan the Governor took out when he was running for Attorney General. Stone has a rather infamous history: He has advised Presidents Nixon, Reagan, Bush and Bush, as well as helped with the 2000 election recount in Florida. He also did some fundraising for Reverend Al Sharpton.

When Bruno fired Stone, the Senate Majority Leader added that the phone call drama was distracting from the real matters of the state. The NY State Democratic Party's spokesman Jonathan Rosen said, "Joe Bruno must be tone deaf. Instead of condemning Roger Stone and apologizing to New Yorkers for this disgraceful episode, he’s hurling more partisan attacks at Eliot Spitzer. The only thing Joe Bruno should be investigating right now is whether or not anyone on his staff or any of his members were aware of Roger Stone’s plans to attack the Governor’s father. Joe Bruno needs to apologize to all New Yorkers, end his nakedly partisan attempts to discredit the Spitzer administration and get back to work.”