Being able to fly somewhere—through the sky, in a metal bird!—is indisputably amazing. But airports aren't known for being the most accommodating places in the world, especially to mothers looking to nurse or pump in private, who have had to use the likes of TSA screening rooms to do so.

On Tuesday, Port Authority unveiled 28 sleek new nursing suites dispersed at four New York-area airports—Newark, JFK, LaGuardia, and Stewart—that let parents nurse or pump in peace. In 2015, the agency installed freestanding nursing pods at Newark and LaGuardia airports—becoming some of the first airports in the United States to offer this amenity (Burlington International Airport, in Vermont, was the first). Since then, the likes of Hartsfield-Jackson Atlanta International Airport and Seattle-Tacoma Airports have added private nursing stations inside several terminals.

JFK has 12 of the new suites, there are nine at Newark, six at LaGuardia, and one at Stewart, all inside the gates post-security. 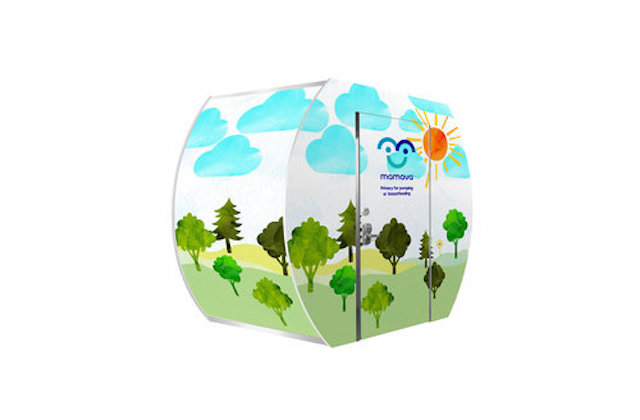 An outside view of a nursing pod (Courtesy of Mamava).

The new nursing suites, made by the company Mamava, are a step above the standalone pods that were previously at the two airports. According to a Port Authority press release, the larger suites are ADA accessible, and can accommodate a parent with their baby, a stroller, and another traveller. Inside, nursing parents will find a bench and fold-down table, as well as an outlet where they can plug in their breast pump if need be. Like everything in our app-driven current reality, unlocking one of the pods requires downloading the Mamava app.

“This a terrific move,” said S. Nadia Hussain, the director of the Maternal Justice Campaign for MomsRising, in a statement. “We are all harried when we travel and making it easier for moms to breastfeed or pump at airports is a significant step.” Online, people have praised airports for offering the amenity, and others have expressed concerns about how it may reinforce stigmas about nursing or pumping in public. It goes without saying that while these nursing suites are great for people who want a little space to themselves, it's by no means mandatory. What's more, in New York State, mothers can legally breastfeed their children anywhere in public.