Monday's bombshell revelation that Amazon might be ready to split its new second headquarters in two and locate one half in Long Island City, initially reported in the Wall Street Journal but later repeated by the Times, let loose a flood of speculation about what it would mean for New Yorkers to have a bunch of Jeff Bezos's best and brightest as new neighbors.

First, though, there a number of questions that still need to be answered about the potential Amazon Cuomoland — which, let's remember, is still just something two unnamed sources have alleged — far more than those addressed in Wednesday's Times summary. Running down the known unknowns:

What will New York City really be getting in terms of new jobs?

All of the reporting about HQ2 has projected 50,000 new jobs. If Amazon splits its new headquarters into HQ2.1 and HQ2.2, presumably each would get somewhere in the neighborhood of 25,000 new jobs. Even for a city with more than 4.4 million jobs currently, that's still more than chicken feed.

New jobs, though, are not the same as new open jobs. Tim Bartik, an economist at the Upjohn Institute for Employment Research, has estimated that in a low-unemployment environment such as we have today, as few as one in five new hires could ultimately end up helping to employ non-working New Yorkers. (That's not the same as only 20% of new hires being from New York — if Amazon hires a Google engineer who lives in the city, then Google backfills with someone from California, that's still no net decrease in local unemployment, and a net increase in the number of people looking for New York apartments.)

And while the underpaid workers who actually ship out your Amazon packages may be recruited locally, the company's headquarters employees are more likely to be high-end workers like coders, who are typically recruited from across the country, if not around the globe. "If Amazon is hiring a lot of software engineers, how many unemployed software engineers are there in the New York area?" asks Bartik. The Wall Street Journal recently reported that FoxConn, in the wake of getting nearly $5 billion in subsidies to open a facility in Wisconsin, is considering bringing in engineers from China to staff it because the local labor market is too tight.

And then, too, that 50,000-job number is more hope than promise. Amazon has said it plans to "grow this second headquarters to include as many as 50,000 high-paying jobs" — eventually, over as many as 17 years. While the company's workforce has been surging, consider that seventeen years ago, Fortune's top ten U.S. businesses included IBM and Enron. Not that Amazon is likely to disappear or shrink dramatically anytime soon, but projecting job figures nearly two decades out is an exercise in futility — and that's even assuming that the robots haven't taken over by then.

The preferred solution in development incentive deals would be to include "clawbacks" — penalties that Amazon would have to pay if it pulled a bait-and-switch with its job numbers. Even if it agreed to clawbacks, though, they haven't always worked out that well in practice: In 2006, for example, Met Life got $27 million in city subsidies to relocate 1,750 workers from Manhattan to Long Island City; when it failed to do so, the city absolved the company of $19 million in clawback fines, and restructured the deal to reduce Met Life’s job requirements.

How much will we be paying for this?

The whole point of Amazon's cross-country contest to be the company's next host was to get localities competing on who would throw the most public cash at the company as an "incentive." But while we know some of the figures that are being thrown around — $7 billion in tax breaks from New Jersey, $8.5 billion in tax expenditures and infrastructure money from Maryland — New York city and state officials haven't said anything specific about what they've offered to drop in Jeff Bezos's tip jar.

It's probably unreasonable to assume that a winning New York bid had to be over $8.5 billion — after all, there are plenty of reasons to want to be in New York over Maryland. But to even be considered, Cuomo and de Blasio almost certainly must have come up with something valued in the billions — speculation has ranged from tax credits via the governor's Excelsior Jobs program to direct grants from the Cuomo-controlled Empire State Development Corporation.

Mayoral spokesperson Jane Meyer tells Gothamist the city “has not offered any discretionary tax incentives to Amazon”; De Blasio has previously said he could provide incentives available to any company, but hasn’t detailed what subsidies those would include. Neither the mayor's nor the governor's office would comment on whether any incentive package could be scaled back if Amazon cuts the number of jobs slated for a new Queens location.

Finally, there's the danger that once Amazon had multiple headquarters, it could start using the threat of relocating workers to extract more subsidies from one city or another. It's already done so with Seattle over a new corporate tax on large employers, which the Seattle city council repealed rather than face an exodus of Amazon jobs.

Where are all these Amazon workers going to live?

In case you haven't noticed, New York is a bit of a housing crunch, so finding room for 25,000 new residents would be no laughing matter. Since Amazon headquarters employees, unlike its warehouse workers, tend to earn high salaries, it's likely that they'd end up pricing existing residents out of LIC and neighborhoods easily accessible from there, which could mean jump-starting gentrification in places like Jackson Heights, Corona, or even Maspeth and Middle Village.

On the bright side, it's entirely possible that those workers, if they arrive at all, won't all arrive until 2035, by which point maybe the new Democratically-controlled state legislature will have finally approved restoring full rent protections. Or Long Island City will be underwater, one of those two. 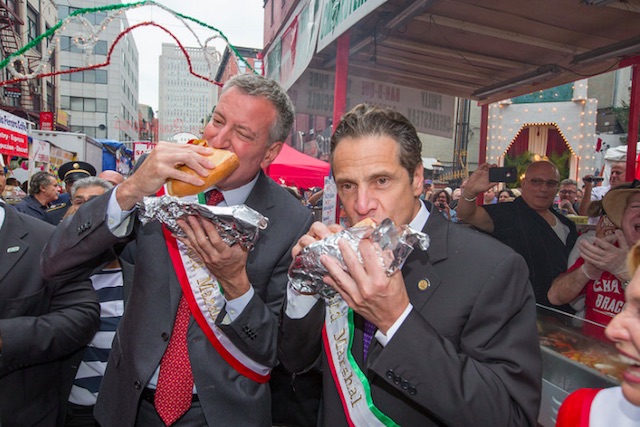 Can this happen without City Council approval?

Amazon would almost certainly want to build its own buildings in Long Island City, which is currently under consideration for a rezoning that would allow for more high-rise construction. In addition, two specific projects, a mixed-use development at Anable Basin on land owned by the plastics company Plaxall and a complex by developers TF Cornerstone on a nearby waterfront site on city-owned land, are seeking spot rezonings that would allow them to build before any broader zoning revisions.

In either case, though, a full build-out could take decades, and rezoning approvals could take a couple of years as they wend their way through the ULURP land-use process. One option would be for the Empire State Development Corporation to take over the land and exempt it from city zoning regulations — Cuomo has vowed that "I will personally get involved in facilitating [Amazon's] construction and their approval process" — but even that could take some time, as we saw in the years-long Atlantic Yards court battle.

Does this mean the BQX streetcar will now get built?

There's been much speculation that Amazon's arrival could give new life to de Blasio's stalled streetcar project, which would provide a new transit route to the company's Long Island City waterfront doorstep. (So long as commuters were coming from the Williamsburg or Red Hook waterfronts, at least.) Much of that looks to have been prompted by the developer-funded advocacy group Friends of the BQX, which rushed out a statement that only a streetcar could allow an Amazon headquarters to "reach its full potential."

The holdup with the BQX, though, was never that city officials couldn't come up with a rationale for building it; it was that the project had a multi-billion-dollar budget hole, one that Amazon isn't going to be in a position to help fill. It's always possible that the state could throw a couple of billion dollars toward BQX as part of its Amazon subsidy package, but that would mean Cuomo and de Blasio sitting down together to help each other, and also would mean Amazon accepting a streetcar to Williamsburg as a major perk in lieu of cold cash — neither of which seems very likely.

But can the subways handle another 25,000 commuters traveling to Long Island City each morning without more trains?

Maybe, probably? Though the Times has wrung its hands that 25,000 new workers would overwhelm subway system capacity, this is a hard question to answer definitively, says Gothamist contributor and Signal Problems transit newsletter author Aaron Gordon, because the MTA doesn't release its figures for ridership by line. (It did provide numbers for trains affected by the L train shutdown, though, so we know such figures exist, even if they're not considered fit for public consumption.)

Regardless, we do know from independent research by the New York Metropolitan Transportation Council that the trains feeding Long Island City are at below capacity right now during rush hour, at least where "capacity" is defined as "the number of people currently being squeezed onto the L and 4/5 trains." Add in that many Amazon employees will be reverse commuters — headed from Manhattan into Queens, say, while most rush-hour passengers are taking the opposite route — and it's probably safe to say that subway capacity isn't the biggest concern here. So long as Amazon waits for the L train shutdown to be over before moving in, anyway, because that's gonna suck for everyone.

Is this really even happening?

For all the news coverage, our only source that Amazon is coming to Queens at all is two unnamed sources — the company has remained tight-lipped about its decision, or even when it will be announced. Could the leaks be intentional trial balloons to test out local response to Amazon's arrival? Will negotiations, over both subsidies and job figures, continue even after the verdict is reached? So very, very many questions.

UPDATE: State Senator Michael Gianaris, whose district covers Long Island City, Astoria, Sunnyside, and parts of Ridgewood, contacted Gothamist just after this story was published to say that he'd like to see less focus on "how much can we do for Amazon," and more on "what they are going to do to make the neighborhood they want to join better."

The central problem, he says, is that the secrecy the deal has been negotiated under has left residents and legislators alike in the dark. "Part of the problem is how precious little information we have about what's being negotiated," Gianaris says. "People are alarmed. Long Island City is already stretched to its limits. And they're very scared about what it would mean to change the entire identity of this neighborhood by dropping this massive development right in the middle of their already gentrifying community."