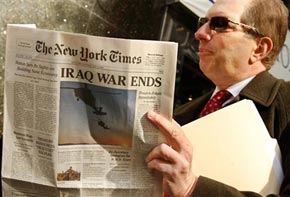 The elaborate fake New York Times stunt may have cost up to $250,000. Though the group claiming responsibility for printing and distributing over one million copies of a July 4, 2009 edition says their costs were $100,000, the NY Post's experts believe that printing a 14-page, 4-color paper are closer to a quarter million for that many copies.

Also, a number of groups were involved: A press release mentioned "The Yes Men, the Anti-Advertising Agency, CODEPINK, United for Peace and Justice, Not An Alternative, May First/People Link, Improv Everywhere, Evil Twin, and Cultures of Resistance" among others.

Another interesting wrinkle: Apparently NY Times journalists contributed articles to the project, which the Yes Men co-founder Andy Bichlbaum said was "our way of communicating what change should really look like." Anti-Advertising CEO Steve Lambert told the Daily Intel, "There were a few people from the Times — we can't tell you who they are. They're respectable journalists." Hilariously, when the Post's reporter asked Times spokeswoman Catherine Mathis about that, she said, "If you give me the names, I can check."

There was a mixed reaction from some readers: One person joked to the Daily News, "In this edition, did the New York Knicks finally win a championship?" while a former Marine and Iraq veteran said, "I feel like I've got mud on my face. This looks like the real thing."

And there won't be another printing--Lambert said there are other things planned, but in the meantime, you'll have to settle for the website.