When a mother of four moved into a three-bedroom apartment in the outer boroughs of New York City, her new home was supposed to serve as a refuge from an abusive ex. Instead, it poisoned her children while the city has failed to enforce the laws made to protect them.

According to the most recent data, nearly 5,000 children in the city were shown to have elevated lead levels last year. But as Mayor Bill de Blasio and other elected officials have renewed the city’s commitment to ending lead poisoning in New York City, Gothamist/WNYC has found that, in this case, a family was placed in a dangerous apartment with aging lead paint through a program for survivors of domestic violence. And nearly three months since the Department of Health and Mental Hygiene ordered the landlord to remove the paint, repairs still haven’t been completed.

Due to the sensitive nature of her case, we are not publishing the mother’s name or her whereabouts.

The trouble began last year when she began to notice her children, all under the age of five, with a white powder around their mouths. They’d been picking at the paint on the windowsills in their bedroom and eating it. A routine blood test later revealed that at least two of the children had elevated lead levels at least three times the Centers for Disease Control’s action limit of 5 micrograms.

That’s when the city’s protocol kicked into action.

In late January, the Department of Health ordered the landlord to remove the paint within five days. The deadline came and went.

In cases where a landlord doesn’t comply, the Department of Housing Preservation and Development, HPD, is supposed to conduct what’s known as an “emergency repair” and send the landlord a bill for the work.

Records provided by HPD show it made three successive attempts in late February and early March. But because the mother works long hours and commutes a far distance, the agency was unable to gain access.

Nearly a month went by. HPD made no further attempts until the same day Gothamist/WNYC contacted it in early April to find out why the work hadn’t been completed.

“My kids is still picking the paint off the wall,” said the mother in an interview at that time. “It's in their room. So you know, you’re sleeping at night, you don't know what they're doing in here. It's like you wake up in the morning, you see paint all over the floor.”

By the time HPD arrived, the landlord had hired a contractor who wasn’t certified to remove lead paint. The agency ordered that work to stop, and the Health Department determined the work hadn’t been done safely, potentially exposing the children to even higher levels of lead.

In a written statement, the DOH said it and HPD are “actively working on this case to ensure the lead abatement work is occurring in a timely and safe manner.” Nearly three months have elapsed since the city’s initial inspection.

A spokesperson for the Mayor's Office said that they had no comment beyond what the agencies told us. 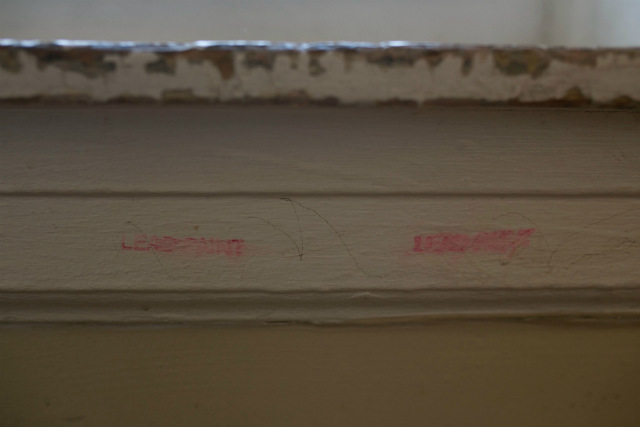 The mother told us she hasn’t kept several appointments with the agency in recent days due to her busy schedule. She also said her landlord has instructed her not to let HPD in the apartment. The landlord, whose name we are withholding to protect the identity of the mother and her children, did not return a request for comment.

Gothamist/WNYC has taken on an unusual role in trying to get both the mother and HPD workers at the apartment at the same time. It’s unclear whether the agency would have the same sense of urgency if a news organization weren’t contacting it regularly.

For Andrew Goldberg, an attorney who first began working on cases of childhood lead paint poisoning in the 1980s, HPD’s conduct in this case fits a wider pattern in the way it enforces the city’s lead laws, which he helped write in the early 2000s.

“This is the oldest story in this process,” said Goldberg. “When they say they can't get access, then they're failing at their core obligation under Local Law One. They need to have a protocol that addresses the reality that parents are working, so if you try to contact them during working hours you're not going to get them. What do they tell the tenant to do if the landlord is harassing them or intimidating them?”

The mother's case illustrates just how wrong the city’s procedures can go, and it comes at a time of renewed urgency among city lawmakers to tackle the issue lead exposure. In January, Mayor Bill de Blasio announced a “vision zero” approach to lead poisoning through an initiative his administration has called LeadFreeNYC. In March, the City Council passed ten bills aimed at strengthening the city’s lead laws. Both aspire to completely eliminate childhood lead exposure.

However, that was Local Law One’s goal all along. When it was passed in 2004, lawmakers intended to end lead poisoning by 2010. And while the number of kids with elevated levels has dropped by more than 90 percent since 2005, thousands of children each year are still exposed.

“All that seems to happen is every five or ten years is a big ruckus about it, and someone moves the goalpost,” said Matthew Chachère, an attorney at the Northern Manhattan Improvement Corporation, NMIC, who worked with Goldberg in drafting Local Law One. “You can have the best crafted policies, but if no one enforces it, it really doesn't matter.”

For example, the lead on this family’s windowsill wasn’t supposed to be there in the first place, as the law requires landlords to abate lead paint on windows and doors at vacancy, before a new tenant moves in. But an analysis by NMIC found the city had only placed one violation on a landlord for failure to comply with this measure since Local Law One went into effect fifteen years ago.

It’s also unclear whether the landlord will face any consequences for using an uncertified contractor to do the work. HPD couldn’t confirm whether the company will face any fines or additional violations for doing so.

The bigger question in this case, however, is how a city program for survivors of domestic violence allowed a family to be placed in an unsafe apartment to begin with. The city referred us to a community organization that managed the case. It said couldn’t comment because it’s bound by confidentiality laws.

This story is part of The Stakes, a new podcast from WNYC. The first episode looks at how the lead industry marketed its products and how public officials can take a more preventive approach to lead poisoning.

Christopher Werth is a senior editor in WNYC’s Narrative Unit. Prior to that, he worked as editor/senior producer of The Daily at The New York Times and senior producer at Freakonomics Radio. He spent eight years as a public-radio reporter in London, reporting for NPR, Marketplace, Newsweek, The Los Angeles Times and the BBC World Service.

#health department
#HPD
#lead paint
#original
Do you know the scoop? Comment below or Send us a Tip