A Decade After Their Debut, 15 Public Toilets Are Still Sitting In A Warehouse In Queens

In 2008, New York City unveiled the first of 20 self-cleaning public toilets to great fanfare and bathroom humor. "What a relief!" deputy mayor Dan Doctoroff said in a statement, while DOT Commissioner Janette Sadik-Khan initiated the first official flush at the inaugural public toilet in Madison Square Park. But if you've never seen or used one of the toilets, which cost 25 cents for 15 minutes of uninterrupted bathroom time, that may be because 15 of them are still sitting in a warehouse in Queens.

On a scorching, 95-degree Tuesday afternoon, City Councilmember Antonio Reynoso and Picture the Homeless held a rally in Madison Square Park to decry the lack of public restrooms in New York City. The event was held next to the first public toilet, which was locked. Behind the structure, out in the open air, there was a roll of toilet paper in a plastic bag, tied to a spike in the gate bordering the park. Next to it were two plastic buckets, one with a considerable amount of urine, and the other nearly filled with used toilet paper.

“They need to release those bathrooms. We have nowhere else to go. Restaurants won’t let us. Subway toilets are all closed," said "Unc" Bobbitt, a member of Picture the Homeless who is currently experiencing street homelessness. "Everybody goes to the bathroom, so these automated public toilets will benefit everyone, not just homeless people."

According to Monique George, the executive director of Picture the Homeless, the NYPD has issued more than 300,000 citations for public urination since 2006. "Nobody should have to choose between a trip to the precinct and a trip to the hospital when they have to pee," George said. (In 2017, the city's Criminal Justice Reform Act directed the NYPD to issue civil summonses for "quality of life" offenses like public urination, instead of criminal summonses.)

Councilmember Reynoso said that the fight for access to public restrooms goes far beyond the homeless. "When I want to use the restroom I don't want to have to walk into a business and ask to use the restroom. I don't want a homeless person in the city of New York to feel uncomfortable asking to use a public bathroom in a business. I want them to know that we have their backs," said Reynoso.

The Department of Transportation says that it is often challenging to find spaces for the toilets, given the rigorous requirements for their installation, such as access to a sewer, available sidewalk space, clearance from subsurface infrastructure, and also community support for the location. According to the DOT, the vast majority of the toilet sites proposed in last 10 years have not been feasible due to either location restrictions or lack of community support.

“DOT will continue to work with communities and elected officials to find feasible locations for Automatic Public Toilets,” a NYC Department of Transportation spokesperson said in an email statement.

A 2014 story in the New York Times noted that "each toilet can cost up to $500,000 to install, depending on its proximity to electric lines, water mains and sewers." Annual maintenance runs around $40,000. 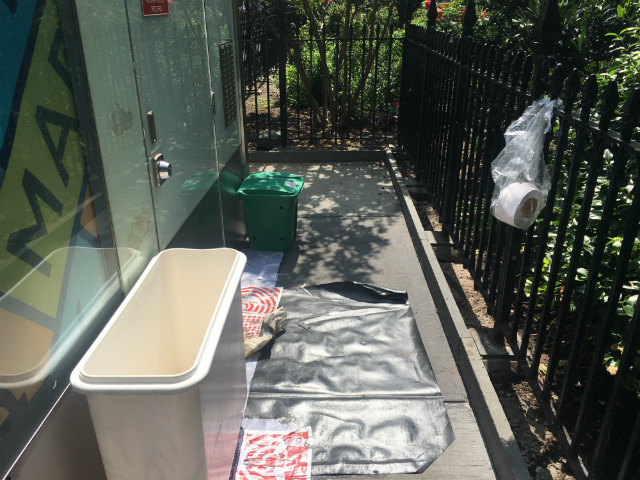 Behind the public toilet at Madison Square Park. The white bucket contained a considerable amount of urine (Andres O'Hara/Gothamist)

The DOT said they were aware of the broken toilet in Madison Square Park, and that they have alerted JCDecaux, the company responsible for the toilets' maintenance and construction.