Last week the NYC subway system malfunctioned spectacularly when the computer system that powers the signals failed. Trains were required to "maintain their positions at the time of the interruption," MTA communications director Tim Minton said following the incident, adding that "some of those trains were in between stations when that occurred." This is a very bad version of purgatory, and one that you can be thrust into at any moment, for an unknown amount of time — 5 minutes, 30 minutes, 3 hours? You will never know until you are rescued.

Just before that computer failure took down much of the city's transit system last Friday, I had hopped on a C train and the car I landed in was hot—not just hot, the heat was actually on. In fear I'd lose the train altogether, I figured I'd just run over to the next car at the following stop. However, the train came creaking to a halt before we got there. Given the temperature of the hot tin box we were in, passengers almost immediately began to panic (including a youthful group of screeching tourists who seemed ill-equipped for this New York Moment). Things got pretty tense when one woman tried to get to the next train cars, only to realize the doors were locked — it was at this point that we collectively acknowledged we were trapped, the only thing going for us was that the train wasn't packed, so at least we'd be able to die without being manspread upon.

To make matters worse, no one was telling us why were stopped or for how long. In fact, the only time we heard from the conductor was when he came over the speaker system asking someone else if he knew what was going on. (He didn't!)

There was no phone service or WiFi, so I was unable to seek out answers on Twitter or alert the MTA of the situation or make last calls to loved ones. I was hurled into the ultimate New York City Survivor Challenger, and the more time went on the more dangerous it became. It is an occupational hazard that I carry around with me every subway nightmare story that has been sent to our tips email over the past 15 years, and at some point the greatest hits of which began playing in mind.

Luckily, however, after about five or ten minutes (the "real feel" was multiples of this), the train started to move again. But this doesn't always happen so quickly. Remember last June, when passengers on an F train had to claw themselves out of a steamy train car, noting afterward how "there was no air"? Remember all those other times over the past week people got trapped on a train for two hours, some crammed in there with no air-conditioning? It's like this scene from The Taking of Pelham One Two Three, but with zero speed and more people. PURE PANIC ENSUES.

So what is protocol when you are trapped in this underground kiln? There isn't any. It's all up to you, and all you can do is prepare, and then when it inevitably happens, try to remain calm while waiting it out.

HOW TO MEDITATE YOUR WAY THROUGH THIS NIGHTMARE

Michael Repucci of Brooklyn's Vajradhara Meditation Center, told me this week that "one's ability to cope will vary greatly based on your karma and depth of meditation practice."

Last dude that wronged me has gotten caught in 2 blackouts and got stuck in a subway car underground for 3 hours. In a span of 10 days.

I’ve never been more convinced that I am a witch.

Even if your karma is in check, it's possible you'll still get trapped in a hot subway car and have no idea how to cope with the situation. Repucci says that when this happens, it's important not to panic, even though as time passes the scenario is "potentially getting bad enough to threaten your health or the health of others on the train." Don't think about that! "Obviously panic won't help," he says, acknowledging that "it's especially hard to remain calm when your health is threatened, and quick, decisive action may be required... [but] remaining calm will help you make the most clear-headed decisions as to what to do."

So, how does one remain calm while one is baking in their own underground tomb?

Were I in such a situation, I would start by focusing on remaining mindful by trying to identify the thoughts or feelings that were arising in my mind, without following them and becoming consumed by them. Spending even a minute or two on mindfulness could help provide a centered, calm place from which to consider action (or intentional inaction). Knowing that beneficial or virtuous mental states are always peaceful, I could examine each thought or feeling that arises with mindfulness, assess whether it feels peaceful or not, and aim to make an active decision to follow only beneficial thoughts, rather than be pulled along by them uncontrollably.

This is also a good time to "develop a heartfelt compassion" for your fellow passengers in the MTA coffin. "I may or may not be able to help any of them right then," he notes, "but coming from an other-centered approach will help reduce feelings of anxiety. Anxiety necessarily begins with a strong sense of self-importance, one which thinks my suffering and my problems are more important than the suffering and problems of others. With an other-centered and somewhat calm mind, I would then be better equipped to help combat my own illogical thoughts and would be less inclined to participate in panic-based group-think."

You'll also want to recognize that you cannot change this — "A patient mind accepts wholeheartedly a situation that it cannot change, not wishing for things to be different than they are." Repucci admits "this is not easy to practice, but the benefits are tremendous and the alternative—getting stressed about a situation over which I have no control—is clearly unhelpful."

While focusing on these sensible meditation practices, also try to find the dark New York amusement in it all. When asked about the above situation, local subway enthusiast Jake Dobkin said: "Congratulations, you've just gotten tickets to one of the greatest performances you can catch in New York. Just wait like 15 minutes and enjoy watching a wide variety of people completely lose their shit — muttering, cursing, and finally screaming at the disinterested MTA gods who have left them stranded. It really passes the time, at least until you have to pee between the cars."

That's one of my biggest nightmares. I'm super claustrophobic and I hate the heat and I think if I got trapped in a subway underground with no power, especially in the summer, I might literally die. I'm praying constantly that it doesn't happen to me.

HOW TO MAKE SURE THIS NIGHTMARE NEVER HAPPENS TO YOU

Aside from having good karma, always pee before getting on the subway. You can also prepare by using these simple avoidance tactics: Never get on a car that is too crowded and never get in a hot car — you may get stuck in there, just wait for the next train! 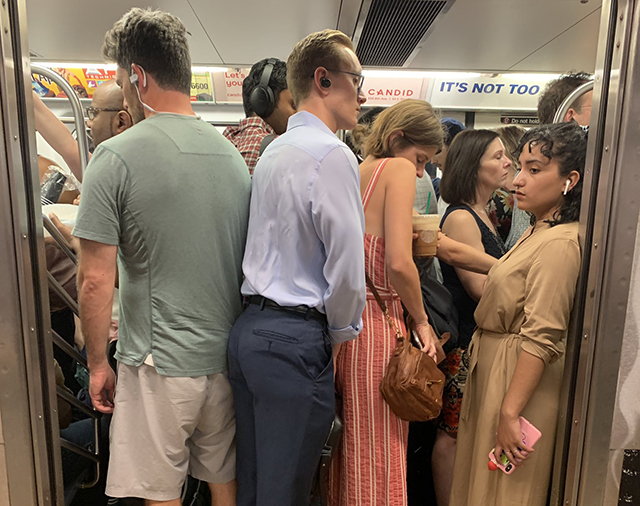