A Close Look at Public Housing 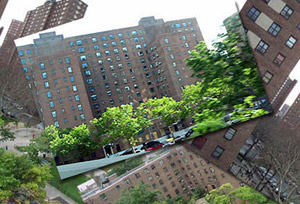 "Hard Times in the Projects," an in-depth review of New York City's publicly subsidized housing program, reveals how living conditions have declined over the past few decades. Federal legislators have reduced funds while operating costs have soared. As a consequence, the New York City Housing Authority (NYCHA) struggles to maintain its buildings, collect the trash, or respond to service calls. Residents have experienced rent hikes and service cuts, and face the possible closure of senior centers and community programs. While New York State and City governments also cut funding during the 1990s and 2000s, the administrations of Bloomberg and Spitzer have recently anounced the restoration of some subsidies.

"Simply put, public housing makes living in New York possible for thousands of low-income families," says the article in Gotham Gazette. Will this be true much longer? 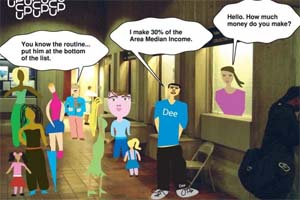 Highlights from the article:
- 400,000 New Yorkers live in NYCHA homes
- Average annual family income in public housing: $20,000
- Average rent: $320
- The waiting list: 130,000 people.
- NYCHA employees: 13,000
- Current NYCHA budget: $2.7 billion, of which $700 million goes for capital expenses
- The City eliminated its $25M contribution after 9/11, but appropriated $120M in 2006.
- The conviction of one family member in public housing can put a whole family on probation
- Tensions with police have escalated since the 1995 merger of housing police with the NYPD
- New York was the first American city to build public housing in 1934 (First Houses on the Lower East Side).