A Century Ago, NYC Didn't Even Have An L Train To Complain About

The uproar over the on-then-off-again shutdown of the L train for repairs may make it impossible to imagine that there was ever a time when north Brooklyn residents survived without a direct subway link to Manhattan. But the L line was actually a fairly late addition to the city’s roster of mass transit.

The bulk of what is now called the L train was constructed between 1916 and 1924 by Brooklyn Rapid Transit, which after its founding in 1896 ran many of Brooklyn’s surface and trolley lines. After the Malbone Street Wreck in 1918, the BRT reorganized as Brooklyn-Manhattan Transit (the BMT), which itself became part of the New York City transit system when the city purchased the private subway lines and combined them with the city-owned Independent lines in 1940.

Prior to the L train’s construction, people traveled between Manhattan and Williamsburg via the Williamsburg Bridge, opened in 1903, which carried the tracks of several surface trolley lines as well as the elevated train that runs up Broadway, today’s J train. A number of ferry routes also crossed the East River between southern Manhattan and northern Brooklyn.

As Peter Derrick explains in his 2001 book Tunneling to the Future, what ultimately became the line through northern Brooklyn was one of several ideas that stemmed from a bipartisan reform commission called the Committee on Congestion of Population in New York. One of the commission’s motives was to spread New York’s population, then largely concentrated in downtown Manhattan tenements, to other parts of the city. (Among other things, overcrowding was leading to tuberculosis epidemics.)

In 1906, Governor Charles Evans Hughes had also created the new Public Service Commission, which, among other efforts, was tasked with creating new transit lines to develop outlying neighborhoods and ease overcrowding. One result was the Dual Contracts, signed by the city in March 1913 with the Interborough Subway (IRT) and Brooklyn Rapid Transit (BRT), to build or substantially improve 36 subway and elevated lines, including the 14th Street-Canarsie Line. 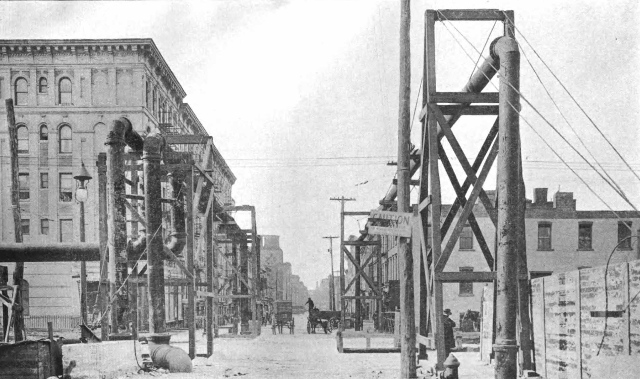 The original line — then called the #16, as BMT trains did not receive letter designations until the 1960s — ran between 6th Avenue and the Montrose Avenue station, a convenient terminal in the line’s early days because new subway cars could be delivered directly from the Long Island Rail Road Bushwick Branch, which terminated at Montrose Avenue and Bushwick Place, a block away from the L train tunnel on Bushwick Avenue. (The LIRR still uses this Bushwick trackage for freight to this day.)

The original section of the L train was forced to take a convoluted route because of the street layout in Williamsburg, as engineers did not want to have to tunnel beneath building foundations. Thus, the tunnel runs under North 7th Street, Metropolitan Avenue, Bushwick Avenue, McKibbin Street, and Harrison Place before straightening its route beneath Wyckoff Avenue for the bulk of its Bushwick run. The construction was done by the then-standard cut and cover method, in which trenches were dug in the streets, tunnels, tracks and signals were placed in the tunnels, and the street surfaces were then rebuilt over the tracks. 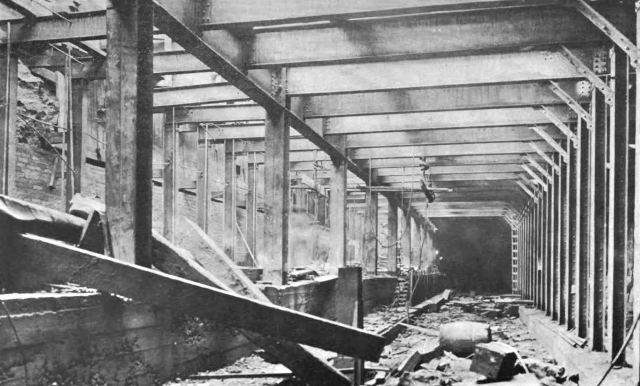 In December 1928, the BMT opened the remainder of the L train’s underground stations between Morgan Avenue and East New York. The line briefly enters the borough of Queens at Halsey Street (the station’s southbound platform is actually in Brooklyn, the northbound in Queens), before turning south and running along the Bay Ridge Long Island Rail Road branch. At the grade-level Wilson Avenue station, the L station allows passengers a look at Most Holy Trinity Cemetery from the southbound platform. The L train then ducks into a tunnel again at the Bushwick-Aberdeen station before emerging at Broadway Junction.

The mosaics in the L train’s underground stations are among the subways’ most interesting. The design of the subway’s newest system of lines, the Independent subway (IND), was decided upon in the mid-to-late 1920s. Subway station architect and designer Squire Vickers knew that the new IND stations would be monochrome and plainer in design, befitting the Machine Age aesthetic. Thus, Vickers went all out with the BMT Canarsie Line, including a rainbow of colors, eschewing the earth tones generally adhered to in previous IRT and BMT stations. To this day, the L train subway stations are perhaps the most aesthetically pleasing, as the station identification plaques and friezes (the color panels below the roofline) consist of interlocking geometric shapes, rectangles, squares and triangles, and no two stations on the line have identical mosaic colors and patterns.

A steam train to the Rockaways

The southernmost stations on the L train, running from Broadway Junction south and running through East New York and terminating at Rockaway Parkway and Glenwood Road in Canarsie, actually predate the rest of the line, having started life as a steam railroad line in October 1865. (Several of Brooklyn’s other subway lines, including the D, F, N and Q, also evolved from steam railroads that originally ran to seaside hotels such as the Brighton, Sea Beach and West End.) Originally, the Brooklyn and Rockaway Beach Railroad ran between the Long Island Rail Road on Atlantic Avenue and Jamaica Bay, where commuters could catch a ferry to the Rockaways. After 1913, these at-grade railroads were converted to elevated lines with funding from the Dual Contracts. 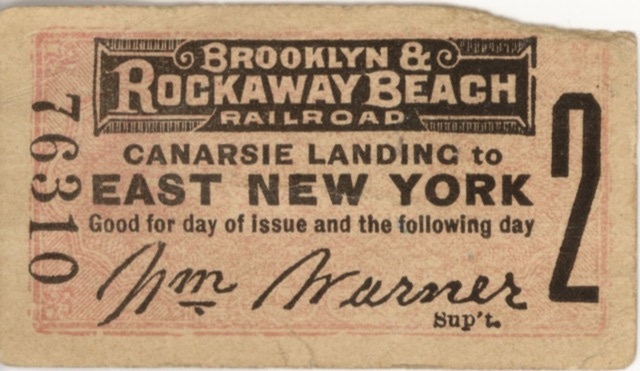 Beginning in the 1830s, the Long Island Rail Road ran down the middle of Atlantic Avenue (as it would until it was placed in a tunnel in 1940), and the Brooklyn and Rockaway Beach line branched off to the south through Brownsville along Vesta Avenue, now Van Sinderen Avenue. The line was single-tracked until 1894, when it was placed on an elevated structure with an electrified third rail. The line ran at grade to Rockaway Parkway, where commuters would transfer to a surface trolley that ran to today’s Rockaway Pier. In 1906, the Rockaway Beach Branch was extended north from Atlantic Avenue to meet the elevated Broadway and Fulton Street lines at Broadway Junction.

In 1928, this elevated trestle was joined to the rest of the Canarsie Line. The trestle retained its connection to the elevated train over Broadway—today’s J train—and in fact there was rush-hour service, known as the JJ train, running to Canarsie via the Broadway tracks until 1968. (The MTA could restore this service if it ever wished to do so.) The Fulton Street El, which originally ran over the Brooklyn Bridge into Manhattan from its inception in the 1880s, was cut back to service between Rockaway and Liberty Avenues in 1940 after the underground IND service opened, and ended service for good in 1956. However, the line’s trackage adjoining the Canarsie Line was not fully dismantled until 2001!

An interesting anomaly on the Canarsie Line remained until 1973: the last gate crossing in the New York City subway system, which allowed East 105th Street to cross the tracks at Turnbull Avenue. After 1973, East 105th Street was closed where it crossed the tracks, and the East 105th Street station was placed on an embankment with a center platform. Leftover trolley poles from the old surface line connection at Rockaway Parkway have never been taken down, and can be seen on Rockaway Parkway and Glenwood Road in the vicinity of the station.

In June 1931, the Canarsie Line was extended one stop west to connect with the new IND 8th Avenue station at 14th Street, which was being prepared for open in September 1932. This “new” 8th Avenue station on the L was designed to look like an IND station, with a bold blue color band and the distinctive lettering used in all other IND stations. However, a 1999 redesign effected a more “BMT”-ish look, with multicolored mosaics. At the same time whimsical sculptures by Tom Otterness, depicting sewer alligators and other creatures emerging from the floors and playing along the ceilings of the station were added to the staircases and other public areas.

Kevin Walsh is the webmaster of the award-winning website Forgotten NY, and the author of the books Forgotten New York (HarperCollins, 2006) and also, with the Greater Astoria Historical Society, Forgotten Queens (Arcadia, 2013)

#flashback
#history
#l train
#longform
#original
Do you know the scoop? Comment below or Send us a Tip