A Block From School, Two Girls Struck in Hit-and-Run 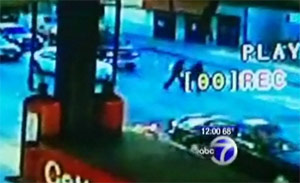 A 12-year-old girl suffered a brain hemorrhage and other injuries after being hit by a black Nissan while crossing the street to school in South Ozone Park, Queens.

Nisha Chowdhry and her friend had been dropped off by Nisha's father in the middle of Rockaway Boulevard. The two girls decided to cross in the middle of the street, managing to pass after a bus, but both were hit by the Nissan. Surveillance video shows the NIssan knocking both girls down: The friend gets up immediately but Nisha remains on the ground, while the car doesn't even stop or slow down. The manager of a nearby Getty station said, "I heard a loud bang. I saw the girl lying in the middle of the road bleeding and the broken side mirror."

Nisha's father told WABC 7 that he "drops the girls off every Wednesday always insisting they cross at the crosswalk, but today they saw a group of friends and crossed the street in the middle of the road." Raj Chowdury, who said his daughter wants to be a teacher, said he returned to road because his "heart said something" and then saw Nisha in the street. He added to the Daily News, "Accidents happen, but [the driver] has to be given justice. Everybody has to be careful. There's too much traffic here."