A Bike Lane On The Verrazano For The Summer? Advocates & Electeds Say It's Feasible

The Verrazano-Narrows Bridge is one of New York City's most beautiful bridges, and arguably its most exclusionary. In recent years, cyclists and pedestrians have begged for access to the elegant double-decker link between Staten Island and Brooklyn, which has remained a drivers-only fortress since it was first unveiled by Robert Moses half a century ago. But while the idea of adding a new lane to the bridge briefly gained support among local residents and elected officials, momentum largely stalled out after the MTA deemed it cost prohibitive in 2016.

Now, some Brooklyn bike advocates are hoping to revive that push, through a novel proposal they're calling Verrazano Summer Streets. Modeled after the city's sporadic, wildly popular car-free initiative, the idea is to hand over the Staten Island-bound lane of the bridge's lower level to cyclists and pedestrians during weekends in July and August. And if the twice-a-week setup isn't practical, the group says, then why not just repurpose the lane fulltime?

"There's no reason why you can't take one of the existing lanes and make something sooner rather than later," Brian Hedden, the leader of the group behind the proposal, Bike South Brooklyn, told Gothamist. "We are putting an emphasis on something that can happen quickly." 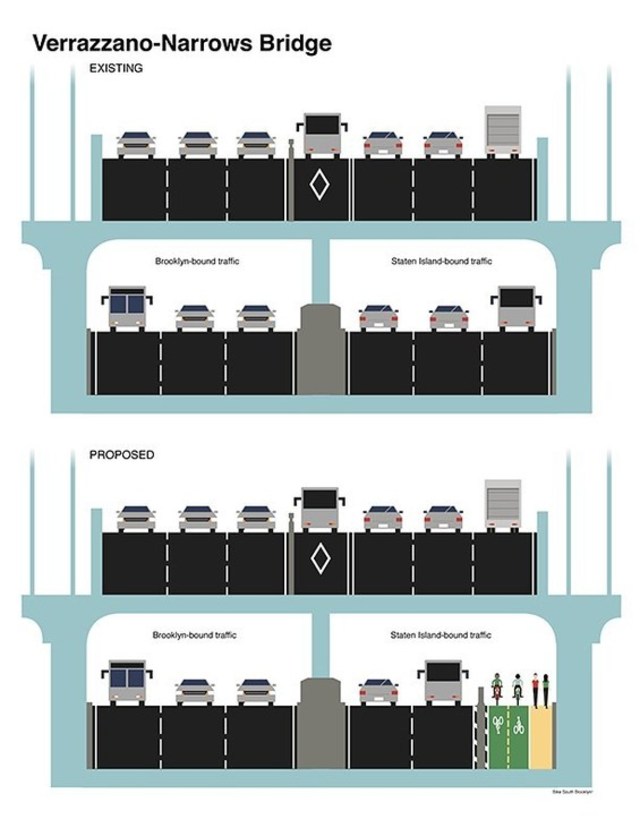 The proposal notes that the Staten Island side has a convenient access point at Fort Wadsworth, where cyclists and pedestrians could connect to the bridge along Marshall Road. On the Brooklyn approach, a slight curb tweak and lamppost relocation would create an opening at 92nd Street and Gatling Place, or a short connector could be built from the north end of J.J. Carty Park. All of this could, in theory, be accomplished through "minor and inexpensive construction"—a far cry from the MTA's estimated $400 million price tag for building a new pedestrian and bike path on the bridge.

Preempting concerns that removing a vehicle lane would increase travel times for drivers, the proposal also highlights two developments in the last few years that have drastically improved the flow of traffic on the bridge: the removal of toll barriers that previously forced drivers to come to a complete stop, and the addition of an HOV lane. The extra lane of traffic means that there'd still be six lanes for Staten Island-bound drivers, even with one lane removed for the new bike and pedestrian path.

The plan's biggest obstacle, according to Hedden, is the MTA, and what he sees as their unique resistance to improving access to outerborough bridges. While crossings owned by the Department of Transportation and Port Authority have made huge strides in recent years, the major MTA-owned bridges—including the Triborough, Throgs Neck, and Whitestone—are all still without bike lanes.

"It's frustrating for the cycling community, particularly here in South Brooklyn," said Hedden. "At this point, it's only the MTA that continues to deny access to cyclists and pedestrians." (A spokesperson for the transit authority did not respond to Gothamist's request for comment).

Already, the proposal is racking up endorsements from advocacy groups, as well as at least one elected official. "Senator [Andrew] Gournardes thinks it's a great idea," said Evan Weinberg, a spokesperson for the newly-elected South Brooklyn representative. "To start it in the summer, when there are fewer people on the road, it'd be a great way to work out the bugs."

Both Transportation Alternatives and the Harbor Ring initiative—which has for years advocated for a 50-mile recreational route around the New York Harbor—are backing the idea, with members of both groups collaborating with Bike South Brooklyn to draft the proposal.

"Given that building a cantilevered walkway and bikeway would costs hundreds of millions of dollars, this is the most realistic idea we've seen to accommodate bicyclists and pedestrians traveling between Brooklyn and Staten Island," said Joe Cutrufo, a spokesperson for TransAlt.

"Cars have 13 lanes on the Verrazzano," he added. "Surely in a city where the majority don't drive we can spare one lane for people."