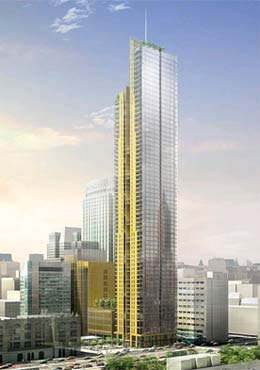 A rendering of Brooklyn's proposed City Tech Tower, designed by Renzo Piano, at Tillary and and Jay Street sent some into speculation mode, especially since its height seemed to be up to 1,000 feet tall. Which would make just about twice the height of the 512-foot tall Williamsburgh Savings Bank, currently the tallest building the Brooklyn.

However, the rendering of the building is apparently old. A representative at Forest City Ratner, the development company which is also developing the chock-full-of-huge buildings Atlantic Yards project, told the Daily News, "This model is an old model. It's an early rendering and not a reflection of what we're considering today." The Post, thought, says sources believe the building could end up being 700 feet anyway.

We think that the latest with the Frank Gehry-designed Miss Brooklyn building at the Atlantic Yards is that it would be shorter than the Williamsburgh Savings Bank, but with all the movement on that project, we could be wrong (tell us!). We do remember that another AY building was asked to be shortened, but that over a year ago.

And speaking of the Atlantic Yards, the lone Brooklyn member of the City Planning Commission was fined $4,000 for violating the city charter: Dolly Williams, who has an investment in Ratner's NJ Nets (which Ratner hopes to move to the Atlantic Yards), had voted to approve some land in the AY plan. Brooklyn Borough President Marty Markowitz is not reappointing Williams, which probably means she'll lose the City Planning parking placard her Porsche has been seen with, too.