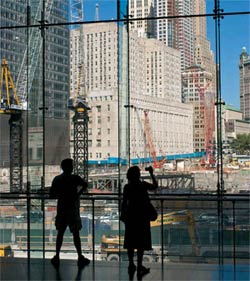 The Port Authority announced that families of 9/11 victims will be able to descend into "the Pit" of Ground Zero briefly during this year's September 11 anniversary.

Last year, the state and city waged an emotional, public battle with victims' families, who were upset that the 2007 anniversary events would not be near the actual World Trade Center, but at nearby Zuccotti Park instead. Then-governor Spitzer and Mayor Bloomberg explained the construction prevented families from going near the site, not realizing the uproar it would bring. Eventually, Bloomberg compromised and allowed families to briefly pay their respects at the pit.

Charles Wolf, whose wife died on 9/11, told 9/11, "[The Port Authority is] going to make a space available for us. They said the ramp would be available for us to use. We don't have any more details than that because they are working all the logistics out with the city, but I think it's really great." Monica Iken, whose husband died, told hte AP, "They are going to open it to bedrock, which is great. We need a place to go. People need to grieve."

However, this will likely be the last year families can access the pit, because of the massive (if very behind-schedule) construction planned at the site. The other ceremonies, like the reading of the names, will be held at Zuccotti Park again.