Late yesterday Joseph Daniels—President and CEO of the 9/11 Memorial and Museum (9/11MM)—announced that the foundation overseeing the National September 11 Memorial Museum at the World Trade Center voted on an admission fee of $24. This fee is mandatory, however, families of victims will not need to pay, and there will be discounted admission for schools and seniors. In addition, three hours each week the museum will be offering free admission to all.

Daniels released a statement noting that "the charge was essential to ensure the organization’s financial health, especially since the museum does not receive governmental support for its operating costs," according to the NY Times. However, critics like retired Deputy Fire Chief Jim Riches and Sally Regenhard (who both lost sons on 9/11) are criticizing the fee on behalf of 9/11 Parents & Families of Firefighters and WTC Victims. (Which they also did last year when the fee was first proposed.) This morning they sent out their own statement, calling the fee a "disgrace... designed to maintain bloated salaries for Stuffed Suits & Fat Cats at GZ.":

"The 9/11MM is supposed to be a non -profit organization and a tribute to 9/11 victims. It was created to tell the story of 9/11 to future generations about the worst day in American history. It was never intended to be a revenue-generating tourist attraction with a prohibitive budget and entrance fee. The solution is not for NY Senators to ask for a handout/bailout from the federal government, but rather to ask the federal government for the National Parks Service to assume full operation and control of the 9/11 MM—at a fraction of the current cost—which should have been done from day one immediately after 9/11/01." 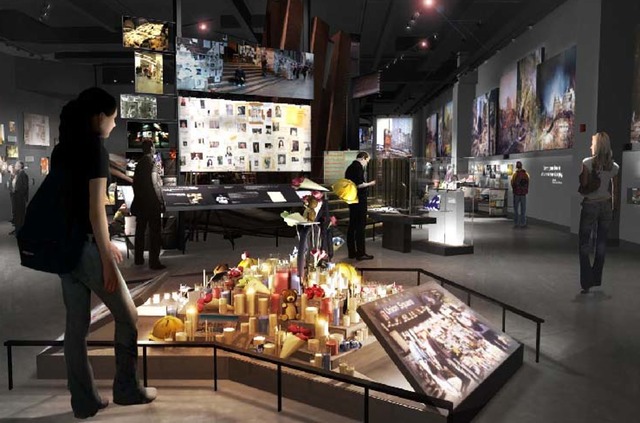 Mayor de Blasio recently said, "I want to make sure it's properly supported. That being said, I honestly believe, and I think Mayor Bloomberg was right about this that the federal government needs to play a role here. This is a nationally important site, it's something that people come to from all over the country, all over the world, and we need the federal government to join with us."

Riches and Regenhard are now calling upon Senators Schumer and Gillibrand, Governor Cuomo, and Mayor De Blasio to stop the fee and control the cost "by supporting and endorsing a plan for the National Parks Service to assume the full management and operation of the 9/11MM as they do with nearly every other memorial in Washington, D.C and across the USA."

The museum is expected to open this Spring.

UPDATE: At a press conference this morning, Mayor de Blasio spoke about the fee, saing, "I think we deserve substantial federal funding for this museum and I don't think we're getting what we deserve. What could be more of a nationally important site than this? It was a national tragedy and people come from all over the nation. I certainly hope that the museum will get that admission down as much as possible... I'd like to see them [the federal government] do better. The bottom line is we're not going to speak about the financing from outside [meaning funding from the city of New York] until we see something from the federal government."

The state is chopping down the half-century old trees to build a new auxiliary lane in Bayside and Oakland Gardens.

The state is chopping down the half-century old trees to build a new auxiliary lane in Bayside and Oakland Gardens.

By
Bahar Ostadan
New School and part-time faculty union to meet with mediator
By
Elizabeth Shwe
NJ stormwater utilities face stigma of 'rain tax' — but other flooding solutions are in play
By
Tiffany Hanssen
Is the NYPD ready for new role in dealing with people in mental health crisis?
By
Samantha Max
Get the news New Yorkers need in your inbox