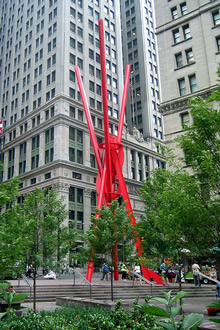 Unhappy that this year's September 11 anniversary events will be moved from Ground Zero to Zuccotti Park, some families of September 11 victims are demanding that the events be moved back or else they'll hold their own ceremony at Ground Zero. The AP reports that a group of eleven September 11 family groups sent a letter to Governor Spitzer and Mayor Bloomberg, saying, "As America watches the memorial service on Sept. 11, 2007, we are sure that they will agree that this event should take place at the real and sacred location."

Officials had moved the ceremony because of construction work. However, the families question whether the 0.75-acre Zuccotti Park will fit all the mourners and suggest that the ceremony could take place on a smaller part of the WTC site, including a construction ramp and haul road. If officials do not respond by Tuesday, "groups say they will apply for a permit to hold their own ceremony at ground zero." Interesting move - it seems unlikely that the city would issue a permit for on a construction site, even on a day when there's no construction activity. We wonder if there will eventually be a compromise to allow mourners to walk down the ramp to leave flowers, but not walk much further than that.

Dennis McKeon, who leads the group Where to Turn, Put it Above Ground, which is fighting for an aboveground memorial, told the AP, "We really want to work with the mayor's office. We really don't want to do a separate ceremony, but we will if we have to."

This year, first responders will be reading the names of victims (in previous years, siblings, children, and spouses/significant others have read the names).