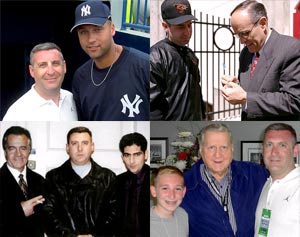 A NYPD academy dropout who lied about his involvement in September 11 rescue activities remains in jail as NJ police continue to investigate him. Fred Parisi, a 40-year-old Jefferson Township, NJ resident, was arrested for stealing from a business partner, but some suspect he used his so-called 9/11 story to raise sympathy--and money to send his son for a baseball program in Holland.

A 2006 NJ Herald article, mainly about Parisi struggle to send his son to Holland, states he's a NYPD cop since 1999, working at Ground Zero and sick from the toxic dust. However, Parisi actually attended the Police Academy for four months starting in July 2001 ; on 9/11, he was training in Brooklyn and spent the days after directing traffic in Murray Hill.

He dropped out when discrepancies about his experience (lies about being discharged from NJ police departments and a previous incident of impersonating a police officer) emerged, but still started his own 9/11 rescue foundation and holding fund-raisers. The Daily News offers a timeline of Parisi's activities and reports NJ police found a NYPD badge in his car, suggesting he may not have returned them when he left the Academy. Plus, Parisi seemingly used his 9/11 "credentials" to meet Derek Jeter, George Steinbrenner, Rudy Giuliani, and Sopranos actors Tony Sirico and Michael Imperioli.