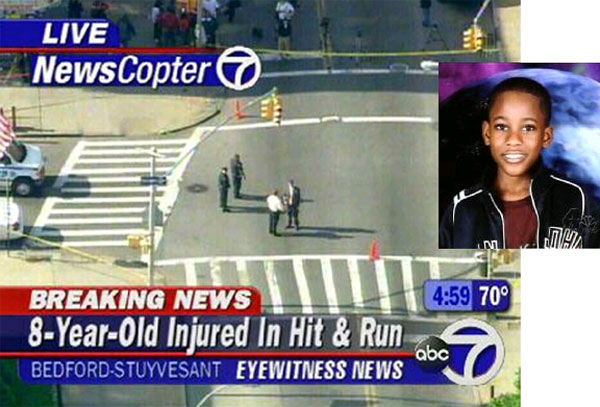 Nine-year-old Akeem Suluki was thrown across the road when a car hit him around 3:30 p.m. He had been leaving his after school program at PS 262 in Bedford Stuyvesant, and the crossing guard tried to pull him out of the Dodge Charger's way but couldn't save him. Suluki was taken to Kings County Hospital Center, after suffering a collapse lung, bleeding to the brain, and more (news reports said he was in a full body cast).

Suluki's mother made a heartfelt plea for the driver to turn himself in and asked, "Why did you run a child over, just hit a child in front of a school like that?" Later that night, 16-year-old Shyquan Burns turned himself in at the 81st Precinct (the Daily News says he was in tears) and was charged with driving without a license and leaving the scene of an accident.

Suluki, who loves playing chess and the Nintendo Wii, is reportedly on a ventilator. WNBC reports he had been thrown 40 feet--the orange cones in the image above indicate the spots where he was hit and where he landed.

#Akeem Suluki
#hit and run
#unlicensed driver
Do you know the scoop? Comment below or Send us a Tip
A new Gothamist is coming! We’ve moved comments over to our beta site. Click here to join the conversation and get a preview of our new website.