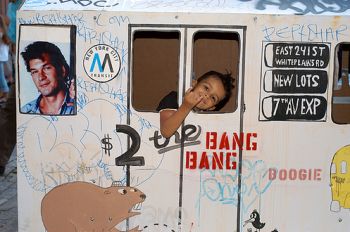 One New York mother decided to let her 9-year-old son fend for himself in the city, and that mom would be NY Sun columnist Lenore Skenazy. In today's Sun, she gives the the play-by-play.

Apparently the little guy had been craving some independence, so Seknazy left him at Bloomingdale's one afternoon with nothing but a map, a MetroCard and $20 -- including some quarters if he needed to call ("No, I did not give him a cell phone. Didn’t want to lose it."). His mission: get home safe.

I trusted him to figure out that he should take the Lexington Avenue subway down, and the 34th Street crosstown bus home. If he couldn’t do that, I trusted him to ask a stranger. And then I even trusted that stranger not to think, “Gee, I was about to catch my train home, but now I think I’ll abduct this adorable child instead.” Long story short: My son got home, ecstatic with independence.

Many want to turn this mom in for child abuse, but she notes: "Justice Department data actually show the number of children abducted by strangers has been going down over the years," and says the next mission for her 9-year-old is to get home from Queens. This all sounds like a new reality show (Survivor: Subway?), and the kid has already gotten his small screen debut -- he appeared on The Today Show this morning (video). She defended herself to Ann Curry, saying, "It’s safe to go on the subway. It’s safe to ride your bike on the streets. We’re like brainwashed because of all the stories we hear that it isn’t safe. But those are the exceptions."

#9-year-old
#bloomingdale's
#lenore skenazy
#son
#subway
#the today show
Do you know the scoop? Comment below or Send us a Tip