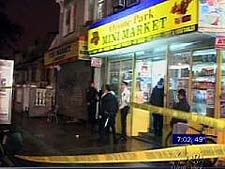 A 9 months pregnant 25-year-old woman was found dead in a Queens house last night. Naisha Delaine was stabbed multiple times in the stomach (the unborn child also died) and slashed in the throat.

According to the Daily News, Delaine's mother "had grown concerned when she could not reach her daughter for several days," so she went to her the Ozone Park apartment to check on her. Unable to get in, the mother contacted Delaine's boyfriend, who had keys, and together they discovered the body in the bedroom.

There were no signs of forced entry, and apparently the upstairs neighbors didn't hear anything. However, a man who works at a nearby shop told the Post "he saw a man wearing a black hooded sweatshirt running into the building shortly before Delaine's body was discovered," "A few minutes later, I heard some blood-curdling screams." Other neighbors said that Delaine seemed happy and friendly.