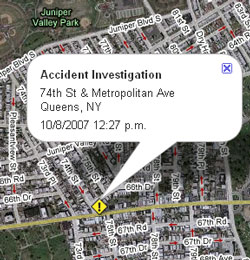 An 81-year-old man who was getting into his parked car in Middle Village, Queens was struck by a vehicle yesterday at 11AM. The car did not stop and passersby chased the van, yelling for the driver to stop. Finally, the car was stopped by another vehicle and one of the men, Anthony Causi, told the Post, "I ran up to the door and yelled at her, 'Did you see what you just did?'" to which the driver, 29-year-old Diana Toro, yelled, "What? What? I didn't do anything." Causi added that it looked like she was on the phone or listening to an iPod.

The two other men held Toro until police came. The victim, Franz Fuerch, was bleeding and unconscious; he later died at Elmhurst hospital. His son, FDNY deputy chief Richard Fuerch, was demoted recently in the wake of the Deutsche Bank fire investigation.

Toro was charged with vehicular manslaughter, DWI, and leaving the scene of a deadly accident; additionally, she did not have a valid license. Fuerch's widow told the Daily News, "We had a long life together. We have three children and four grandchildren."

#children
#daily news
#deutsche bank
#fdny
#fire
#hospital
#ipod
#middle village
#news
#News: NYC
#police
#queens
Do you know the scoop? Comment below or Send us a Tip
A new Gothamist is coming! We’ve moved comments over to our beta site. Click here to join the conversation and get a preview of our new website.