80-Story LES Tower Will Get A 77-Story Neighbor

Plans for a new 77-story mixed-use tower at 247 Cherry Street on the Lower East Side—practically next door to Extell's 80-story One Manhattan Square—were met with anger by nearby residents Wednesday night.

The glass and terracota brick tower aims to bring 600 new rental units to the neighborhood, but despite plans for 150 affordable units, the absence of a poor door, renovations to a nearby senior center, and a new 4,600 square foot community center, the tower's backers faced "contentious" pushback from "a battle-hardened crew sick of constant construction at their doorstep," according to Bowery Boogie.

Two Bridges Neighborhood Council helped broker the deal with JDS Development. Residents at the meeting reportedly shouted down TBNC president Victor Papa at every opportunity, accusing him of being a "liar" guilty of accepting kickbacks from developers.

“There is no more space on the Lower East Side to develop affordable housing, except this [project], which makes it very attractive for us to do," Papa told The Lo Down, which broke the news of the 247 Cherry Street tower. 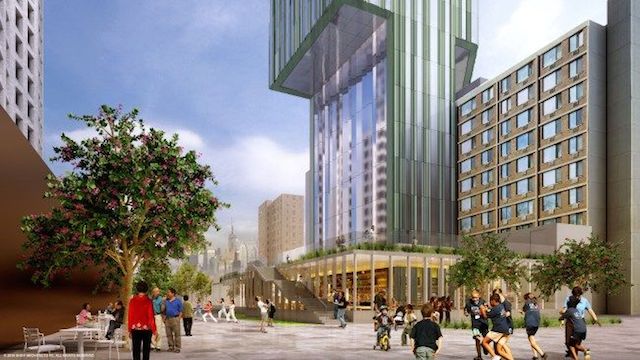 The planned tower would be situated behind Extell's One Manhattan Square on a site currently co-owned by the Two Bridges Council and Settlement Housing Fund.

JDS paid a total of $51 million for the property, which will have a total footprint of approximately 9,000 square feet and will soar 900 feet. SHoP Architects, the firm responsible for the Barclays Center, a proposed $5.3 billion facelift to LaGuardia, the revamped Domino Sugar Factory, the giant residential towers at 626 First Avenue, and just about every other high profile NYC development you can think of, designed the project.

Rental units will include studio, 1-bedroom, and 2-bedroom apartments, with designated affordable units evenly dispersed throughout the tower. Outdoor terrace space will be built in the middle of the skyscraper and its top floor will feature amenities accessible to all residents. On its ground floor the tower will house retail and a public plaza. Construction on the new tower is not slated to begin until at least 2018.

Construction of the new tower will require razing a small community center on Cherry Street. The building will cantilever over part of the Pathmark Pharmacy property and nearly touch the nearby senior center.

Other high-rise projects by JDS Development include the in-progress American Copper Buildings along the East River and a 1,000-foot tower in Downtown Brooklyn destined to become the borough's tallest building.

#Extell
#Lower East Side
#shop architects
Do you know the scoop? Comment below or Send us a Tip
A new Gothamist is coming! We’ve moved comments over to our beta site. Click here to join the conversation and get a preview of our new website.