The 4:41 p.m. train, with 300 passengers, from Grand Central Central on its way to New Haven derailed at 6:10 p.m. near the I-95 overpass in Bridgeport. It was struck by a train traveling in the opposite direction—the 5:30 p.m. from New Haven, which had 400 passengers. Part of the wall and roof of some train cars were ripped away and tracks were twisted.

One passenger told WCBS 2, "Everything just came to a stop. We went flying. 'I thought, ‘This is the end. Brace yourself.’” Another said, "I saw that one entire compartment was completely ripped open. The whole side was gone, and people there lying in between trains."

Some passengers thought it might have been a bombing. A man on the westbound train said to NBC New York, "We came to a sudden halt. We were jerked. There was smoke. People were screaming; people were really nervous. We were pretty shaken up. They had to smash a window to get us out." One woman told the AP, "All I know was I was in the air, hitting seats, bouncing around, flying down the aisle and finally I came to a stop on one seat. It happened so fast I had no idea what was going on. All I know is we crashed."

Most of the injured were treating quickly. An investigation is currently being conducted—the National Transportation Safety Board is on the scene, as are Connecticut authorities and the MTA. 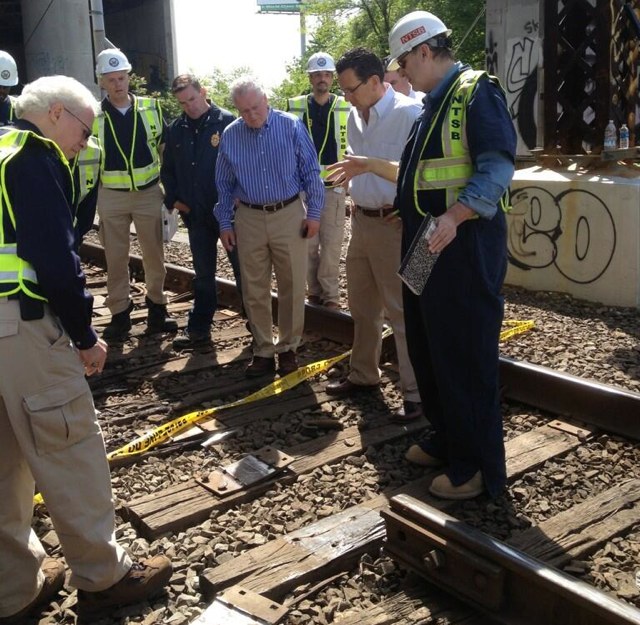 The MTA says, "There are four tracks in this segment of the New Haven Line, but two of those tracks are out of service for a long-term project to replace overhead wires. On the remaining two tracks, there was extensive infrastructure damage as a result of the collision. Both the track and the overhead wire have been damaged. The train cars cannot be removed until the on-scene investigation is complete, and they will need to be removed by crane."

#collision
#connecticut
#mass transit
#metro north
#train
Do you know the scoop? Comment below or Send us a Tip