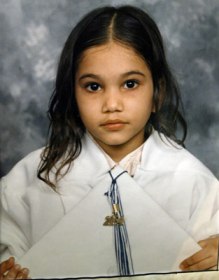 Yesterday, a jury heard opening statements in the Nixzmary Brown murder trial. Her stepfather, Cesar Rodriguez, faces charges of second-degree murder, after the 7-year-old Brooklyn girl spent her final hours beaten and having her head hit against the bathtub faucet and held under water, after a life where she was repeatedly beaten, tied to a chair, starved, and made to use a litter box.

The jurors cried when they saw a photograph of the child's dead body from January 2006. Per the Daily News, "the 8-by-10-inch picture showed the 7-year-old lying on a wooden floor, a pair of red sweatpants hanging off her malnourished frame. Bruises covered her torso. Her half-opened eyes were blackened." Her body also had "ugly cuts." To counter the power of the photograph and media coverage of the case, the defense strategy was to "blame the victim" - and the victim's mother.

Defense lawyer Jeffrey Schwartz said Nixzmary terrorized her siblings, "She was like a little Houdini trying to get out," admitting that Rodriguez would discipline her by whipping her with a belt.

The night she died, Schwartz said his client beat her because she stole yogurt (that Rodriguez specifically wouldn't allow her) but said, "When you’re poor and you can’t afford unlimited amounts of food and you have six children, you have to make sure that everyone gets what they’re entitled to get, so that you can ensure that everyone stays healthy.” (Nixzmary was severely malnourished, weighing 35 pounds, the typical weight for a 3 or 4-year-old.) Schwartz added that the girl was alive before her mother Nixzaliz Santiago tended to her, "And then, ladies and gentlemen, that's when Mommy Dearest takes over." Santiago will face murder charges in a separate trial.

Dwimoh described the child's life as one of "systemic torture," "It was how she died that tells us how she lived. And it was because of how she lived that she died."

The first witness, neighbor Ulvis Rivera who was called when Nixzmary was found unconscious, broke down on the stand. She admitted that Rodriguez was administering CPR, but said the girl was clearly dead, "She was on the floor. Her face was disfigured. She had no pulse. She wasn't breathing... She had bruises all over her face."

Nixzmary Brown's death, as well as others, forced changes at the Administration for Children's Services, which had been aware of problems in the home (teachers noticed the girl missed 46 days of school the prior fall). Last fall, the agency announced retired police detectives would work with caseworkers.

#brooklyn
#Cesar Rodriguez
#child abuse
#daily news
#get out
#murder
#news
#Nixzaliz Santiago
#nixzmary brown
Do you know the scoop? Comment below or Send us a Tip