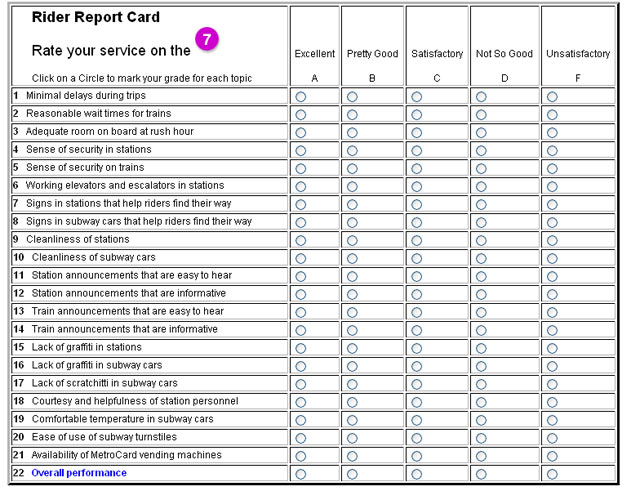 Yesterday, the NYC Transit Authority gave 7 train riders the chance to tell them what they think about the 7 line and service with the first ever subway/bus report cards. NYCTA president Howard Roberts Jr. hopes that eventually all subway and bus riders will be able to grade their lines so the agency can work with customers' suggestions.

Richard Blansit, private contractor: "The No. 7 train is excellent - best in the city, best in the world [But] they could improve service in the afternoon and run more trains so it's less crowded."

Bobby Rivera, paralegal: "The 7 train has to be one of the worst of all of New York It's really horrible and always crowded. No question, it's got to be a big F."

Maxine Appling: "They really need to change the configuration of the seats. There aren't enough of them, and the seats aren't big enough, and for overweight people, that is a problem."

Brooke Maurer, summer intern: "The sign comes up that there's an express coming, and then it turns our to be a local. That's confusing."

No, Brooke, that's the MTA. None of the people the Daily News spoke to said they would give the 7 an "A" (the grades were in the B to F range). The News also found one station cleaner dealing with reports cards littered on the platform: Wilfred Fowler said, "A lot of people are reading them and taking it seriously, but a lot of people are throwing them away as quick as they get them."

Which sucks, because we're sure some people would love to grade the 7. Thankfully, you can grade the 7 online! Here's the MTA's website to do that - the survey is offered in many different languages. The report cards also allow you to make three other suggestions to improve the line.

And the physical report cards will also be handed out at 82nd Street – 33rd /Rawson Streets, and tomorrow at Queensboro Plaza – Times Square/42nd Street.