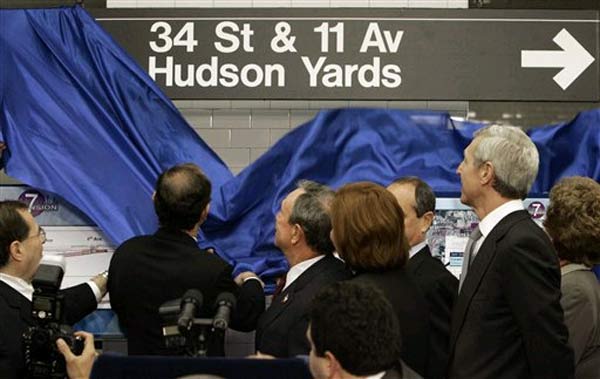 Yesterday, Governor Spitzer, Mayor Bloomberg, MTA CEO and Executive Director Lee Sander and other officials kicked off the extension of the 7 line by unveiling a new sign in Times Square pointing the way to Hudson Yards. Ah, nothing like putting in signs for things that won't be ready for years - the 7 will reach 34th and 11th Avenue in 2013.

The 7 line extension will cost $2 billion for the 1.5 miles (and the platforms will get glass doors), but one of the more controversial aspects is how the line does not have a stop at 41st Street and 10th Avenue at the moment. The MTA has the option to build a "shell" of a station in case funds make it possible to build out a stop, but for now, the agency and city and state governments aren't concerned with giving Hell's Kitchen residents a subway stop. amNewYork reports Deputy Mayor Dan Doctoroff "[said] the area around 41nd Street and 10th Avenue in Hells Kitchen is developing without a subway already," therefore no stop is needed to continue the neighborhood's growth.

And yesterday, the five developers bidding on the Hudson Yards took their projects to the public last night by having designer present the plans. Reactions ranged from "meh" to "interesting" to "horrifying", but Atlantic Yards Report's Norman Oder points out that at least there's a public process for the West Side rail yards, unlike the Atlantic Yards.

Photograph of Governor Spitzer, Mayor Bloomberg and other officials show off the new Hudson Yards sign at the Times Square subway station by Richard Drew/AP