An East Village man has died from injuries sustained during a a brutal assault on Friday night. Police say that 68-year-old Ruan Wen Hui died at Bellevue Hospital last night after he was attacked by an unknown man on East 6th Street near Avenue D. 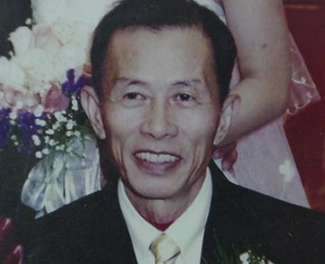 Hui, a retired garment factory worker who lived a block away from the attack on Avenue C, was approached by his assailant around 8:43 p.m. in front of 745 East 6th Street. Witnesses heard yelling, and extremely graphic surveillance video shows Hui being shoved to the ground as his assailant punches and stomps on his head. Several minutes pass before bystanders stop to assist Hui.

“I couldn’t believe that this happened to my father because my father is a very good man," Hui's daughter tells CBS. "He always helps people and he always smiles. Everybody thinks that he’s the best person in this world." Hui, a married father of three, was on his way home after dropping off his grandchildren when he was assaulted.

According to an NYPD spokeswoman, no arrests have been made in the case. Police are offering a $2,000 reward for information on the suspect. Anyone with information in regards to this incident is asked to call Crime Stoppers at 1-800-577-TIPS (8477). The public can also submit their tips at Crime Stoppers' website or by texting their tips to 274637 (CRIMES) then enter TIP577. All tips are confidential.

#9th precinct
#east village
#murder
Do you know the scoop? Comment below or Send us a Tip