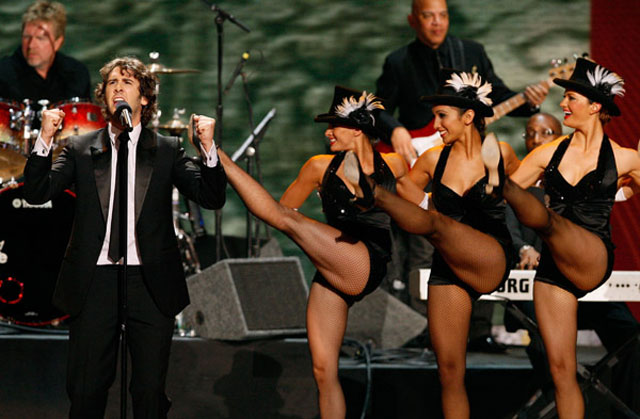 One question: Did Josh Groban owe the Emmy producers a huge favor? Because his performance of a medley of various TV theme show songs (The Simpsons, Friends, The Andy Griffith Show, Gilligan's Island, Golden Girls, South Park, Happy Days, The Jeffersons) was excruciating. He did deserve the applause, if only for fortitude...or maybe the applause was for Animal from The Muppets, who dropped in to play the drums. Still, that plus the host idea (five hosts- Ryan Seacrest, Howie Mandel, Jeff Probst, Tom Bergeron and Heidi Klum) ...terrible, terrible, terrible. 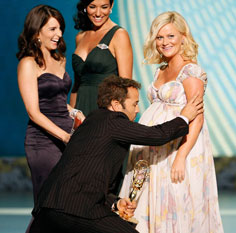 However, there are bright spots: Zeljko Ivanek, known to many as D.A. Ed Danvers on Homicide, won an Emmy for supporting actor in a drama (Damages) and Tina Fey winning a writing Emmy for 30 Rock. The Colbert Report won best writing for variety, music or comedy show while The Daily Show won best variety, music or comedy show. Ricky Gervais discussing acceptance speeches and demanding his 2007 Emmy from Steven Carrell (Steven Colbert and Jon Stewart gave it to Carrell in Gervais's absence last year). And Don Rickles presenting.

There have also been some shoutouts to the election year: Laura Linney, after winning best actress in a miniseries or movie (John Adams) had a shoutout to community organizers; Jay Roach, winning best direction for a miniseries or movie (Recount), asked the American public to keep their politicians honest if voter shenanigans occur; presenter President Jed Bartlett Martin Sheen asked viewers to vote for the candidate of their choice; and Tom Hanks, accepting the best miniseries or movie Emmy (for John Adams, which he produced), mentioned that Adams's election was full of lies and mean-spiritedness, saying it was great things have come so far.

See Emmy winners as they are announced on Variety.com. Recent winners include The Amazing Race for best reality show and Don Rickles, for individual performance in a variety or music program (Mr. Warmth).

Update: Mad Men, about the employees of an ad agency during the 1960s, won best drama and 30 Rock won best comedy. 30 Rock creator Tina Fey, who also won best actress (and best writing earlier in the night), thanked many people as well as the city of New York for the tax breaks that made the show's production possible.