6 Signs That Summer Isn't Dead Yet

Summer doesn't technically end until September 22nd, with the fall equinox coming for our jorts on September 23rd. But everyone knows that at least anecdotally, summer died when you closed your eyes last night—Labor Day weekend marks summer's last rasping breaths, and decorum demands that you commence sweating through your tweed by the end of the week.

Still, there's always that one asshole who refuses to leave the party when he should, firing off beach barbecue invites on Facebook long after everyone else has given in to fall activities. Fine, then, we'll humor this clown.

It's Still Hotter Than Hell 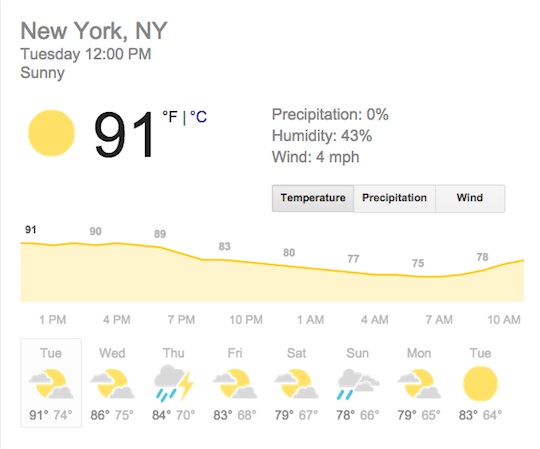 You can't argue with "data," and anyway, half the city is currently using its lunch break to leave the air conditioned womb of the office and grab an iced coffee—just like summer. And oh look—it's not just hot, it's record-setting.

The Beaches Are Still Open

Sufferers of summer separation anxiety have until October 12th to take the ferry out to Governors Island, where they can romp in the rolling grasses and eat lángos, Hungary's most important export, until they burst. What is lángos? It's deep fried flat bread smeared in garlic, sour cream and cheese. It will sop up your hangover and make you forget that soon it will be fall, followed by winter, and that you are only getting older, and also fatter, thanks to your now troublesome lángos addiction. It's pronounced "lahn-gosh."

You Can Still Get To The Honorable William Wall

The Honorable William Wall is a badass barge that floats in the middle of New York Harbor, serving drinks to members of the Manhattan Yacht Club or any plebeian willing to pay 20 bucks to access it. Sipping a double G&T on its upper deck is the very essence of summer, so take advantage before it shutters for the season in October.

You Can Still Watch Outdoor Movies

Yep. Movies will play in parks around the city clear through the end of September, when an evening chill might even compel you to pull your companion a little closer, a definite improvement from the hotter months when you want nothing to do with that sweat monster.

You Can Still Rent A Kayak Or Paddleboat

Someday very soon, New York's waterways will harden into frozen masses, which you'll barely be able to make out through your teary, wind-battered eyes. "Why didn't I kayak this year?" you'll whimper into your scarf, and no one will be able to hear you, because no one else is foolish enough to be standing by the water on an icy January afternoon. It's not too late—you can row, kayak or paddleboat through October. Clicking here for more information will take but a minute; regret for what could have been will haunt you for a lifetime.

#fall
#goodbye to all that
#seasons
#summer
Do you know the scoop? Comment below or Send us a Tip