The new midtown pedestrian plaza 6 ½ Avenue is now fully operational, the DOT announced today. Back in March, the city announced that it would improve upon an open secret familiar to midtown workers: open public spaces let you to cut between 51st and 57th Streets mid-block without crawling ignominiously over to Sixth or Seventh Avenues. What the DOT has done is added high-visibility pedestrian crosswalks, reflective markers and Stop signs on cross streets, which will hopefully "reduce conflicts between motorists and pedestrians." We suppose reducing unhinged anti-pedestrian editorials in the NY Post is too much to ask...

According to the DOT, before the project up to 1,200 pedestrians an hour would cross midblock to reach these plazas at its busiest location, entering the street from between parked vehicles and without established crosswalks. Now they'll be able to glide proudly across the intersections at 6/12 Avenue, passing seamlessly into their offices on the 7 ½ floor. About the public spaces that made this possible, the DOT explains:

The six spaces connected by these new crosswalks are part of more than 500 areas citywide known as Privately Owned Public Spaces, which were built near ground level of newly constructed buildings. The spaces that comprise 6 ½ Avenue were created between 1984 and 1990 and include commercial, hotel and residential buildings, with public spaces ranging from open plazas and atria to wide lobbies and enclosed corridors. The new crossings shorten trips eliminating the need for pedestrians to travel back and forth to the main avenues to reach midblock locations.

The DOT says adjacent property owners will clean the newly enlarged pedestrian areas, with the businesses maintaining planters and benches. So enjoy—just remember not to engage in any political activism that challenges the status quo. 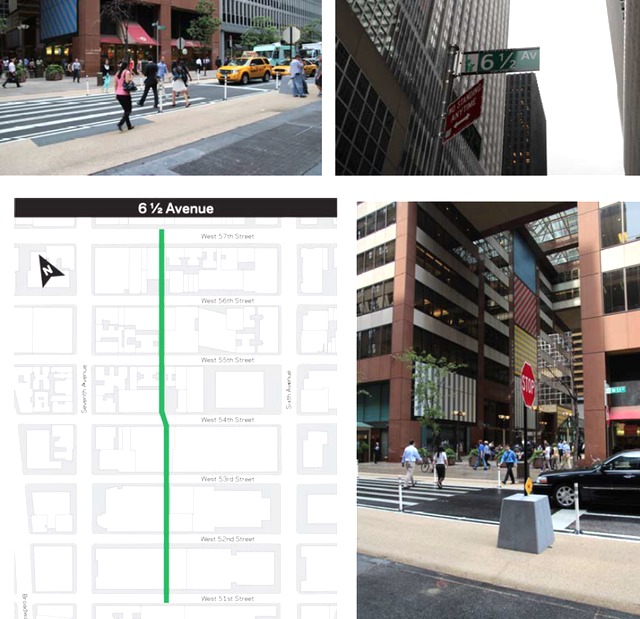 #6 1/2 avenue
#dot
#original
Do you know the scoop? Comment below or Send us a Tip